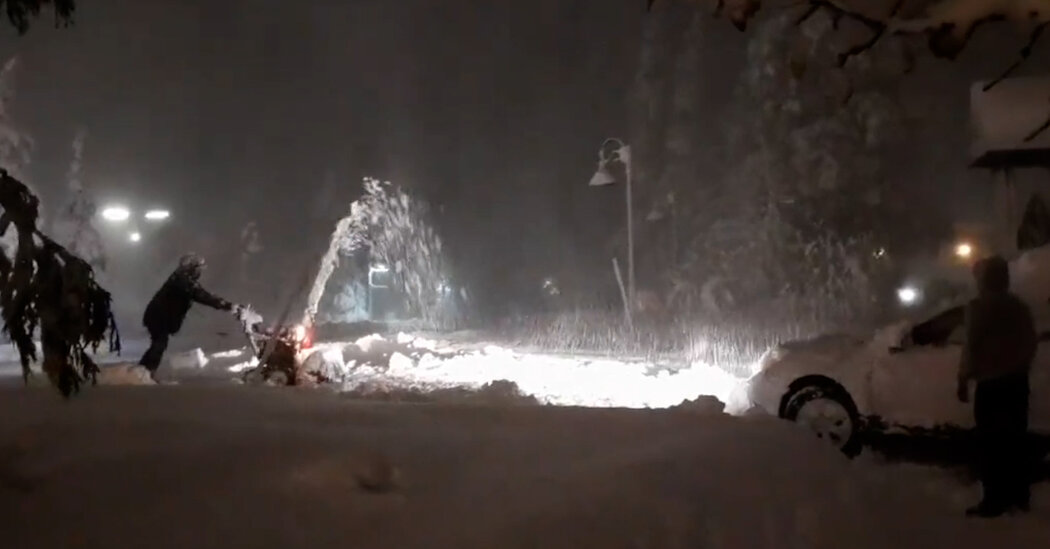 Nearly 16 million people from Arizona to Montana and as far as Minnesota were under a winter weather advisory or winter storm warning Monday as a major winter storm continued inching across the country this week, forecasters said.

The storm reached the Southern and Central Plains late Monday, and was expected to hit the Lower Mississippi Valley by midweek, the Weather Service said, potentially causing severe weather and flash flooding.

By Tuesday, service meteorologists said, the system could become a major winter storm from the Northern and Central Plains to the Upper Midwest, which could result in “multiple days of significant travel and infrastructure impacts due to to snow, blowing snow and freezing rain.” The Weather Service stressed that “travel may become impossible” and warned that snow accumulations could be between six and 12 inches. Higher amounts, near two feet, were expected in parts of South Dakota and Nebraska. Ice buildup and wind gusts in excess of 40 to 50 miles per hour were also a concern.

“The biggest concern is where you expect blizzard conditions,” said David Roth, a meteorologist with the service, adding that in regions with sufficient snow and high winds, visibility could be close to zero. “These are conditions where you can walk out your front door and lose your house; you won’t see it anymore, ”he added.

Snow was expected to decrease from west to east through the day on Tuesday, the service said, adding that additional snow accumulations are possible in some regions, especially in the central Great Basin, central Rocky Mountains and south, and Arizona.

In the Sierra Nevada, snow fell at a rapid rate of about three inches per hour over the weekend, blanketing roads and creating “nearly impossible travel” and “almost zero visibility,” the service said.

On Monday, the Sugar Bowl Resort in the ski areas of mountainous Norden, California, reported nearly five feet of snow since Friday. Other parts of the region saw two to five feet of snow, causing some road closures near the mountains.

Extreme winter hit the west over the weekend.

The storm system began moving inshore late Friday, bringing strong winds to the California coast. But in the mountains, that moisture turned into heavy snow.

Forecasters had forecast “extreme impacts,” the most severe warning on the Weather Service’s winter storm severity scale, in the Sierra Nevada over the weekend.

The California Department of Transportation warned residents Sunday to beware of dangerous road conditions and closures in the affected regions. The maintenance crews were still labor to clear snow from the lanes on Sunday afternoon.

As the low pressure system made landfall, it touched an atmospheric river, an area of ​​moisture that flows through the sky like a river at atmosphere level near where planes fly. The combination allowed snowfall totals to reach one to three feet across much of the higher ground.

Meteorologists are predicting blizzard conditions on the plains.

“We are increasingly confident that we are going to be dealing with a fairly significant snowstorm on the Northern Plains” this week, said Greg Carbin, head of forecast operations for the Weather Prediction Center.

The system will move out of the Rocky Mountains and begin to strengthen, increasing the possibility of heavy snow, blizzards, and freezing rain across the Northern and Central Plains. Across the Dakotas, it’s likely at least a foot, Carbin said.

“There is the potential there for some really impressive numbers,” he added, as he expects this storm system will likely slow down. A buildup of sleet and ice is also expected in parts of the eastern Dakotas through the upper Midwest.

Severe storms, possibly with tornadoes, are expected in parts of the South.

Severe thunderstorms, possibly capable of producing tornadoes, appear highly likely to form Tuesday in an area from eastern Texas to Arkansas, Louisiana and much of Mississippi, said Bill Bunting, chief of forecast operations at the California Prediction Center. storms

“Most fall and winter severe weather events typically have several characteristics in common,” Bunting said, “including a low-pressure system near or north of the area of ​​concern, increasingly humid airflow to the south from the northward-moving Gulf of Mexico prior to the event and a cold front moving eastward into the area.”

Forecasters warn that “the greatest risk of severe weather and flash flooding will be on Tuesday.”

Damaging winds, hail, and tornadoes will be a risk to more than 20 million people in East Texas and Oklahoma, all of Louisiana, and parts of Arkansas and Mississippi.

“A couple of strong tornadoes will be possible,” meteorologists with the Storm Prediction Center wrote Monday.

Tornadoes are not uncommon this time of year, but they are less likely than in the spring and early summer.

Severe winter storms like the ones forecast this week can be more dangerous than those that form during the peak severe weather season in May and June.

“Because the days are shorter,” said Harold Brooks, a senior scientist at the National Severe Storms Laboratory, part of the National Oceanic and Atmospheric Administration, these storms are more likely to occur after dark.” This “makes them more dangerous” because people in danger can’t spot them when they get close, he said.

Flash flooding is also a concern Tuesday from Houston to north of Memphis. Excessive rain from this storm will push east on Wednesday, putting much of the South at risk of heavy rain that could lead to flash flooding.

The heaviest rains are likely to occur from Louisiana to north-central Mississippi and western Tennessee, the service said Monday.

Snowfall in the northeast.

Some snow fell over southern New England and upstate New York on Sunday. In Albany, New York, there was between five and seven inches of snow, said Bob Oravec, a meteorologist with the Weather Service.

About eight inches of snow fell in the Berkshires, Oravec added, and Hartford, Connecticut, recorded between four and six inches.

Boston and Providence, RI each had an inch or two of snow.

“Some areas may not have gotten much snow this winter yet,” Oravec said. “So whenever snow falls, it’s always shocking.”

Snow chances will return later in the week as the main storm system in the US stems from a coastal storm.

“The likely development of a nor’easter off the Mid-Atlantic coast brings a threat to winter weather and potentially heavy snowfall in the inland parts of the Northeast and the Mid-Atlantic,” forecast center meteorologists said Monday.
The most reliable computer forecast models agree that a nor’easter will form from this storm system on Thursday in the mid-Atlantic region, but show the storm will remain near the coast for what is often known like a coastal hugger. Inland areas will cool down enough and have the opportunity to see abundant snow from this system.

However, when a storm system like this one approaches the coast, most of the time it blows enough warm air out of the water to keep major cities along the Northeast coast above freezing, which means that cities like New York can probably expect more of a rainy mess on Thursday through Friday mornings.

As with many forecasts, especially ones that are a few days away, forecasters offer a disclaimer.

“There remains a lot of uncertainty in the details of this system, and even small changes in this low track could cause differences in precipitation types/amounts in the east.”