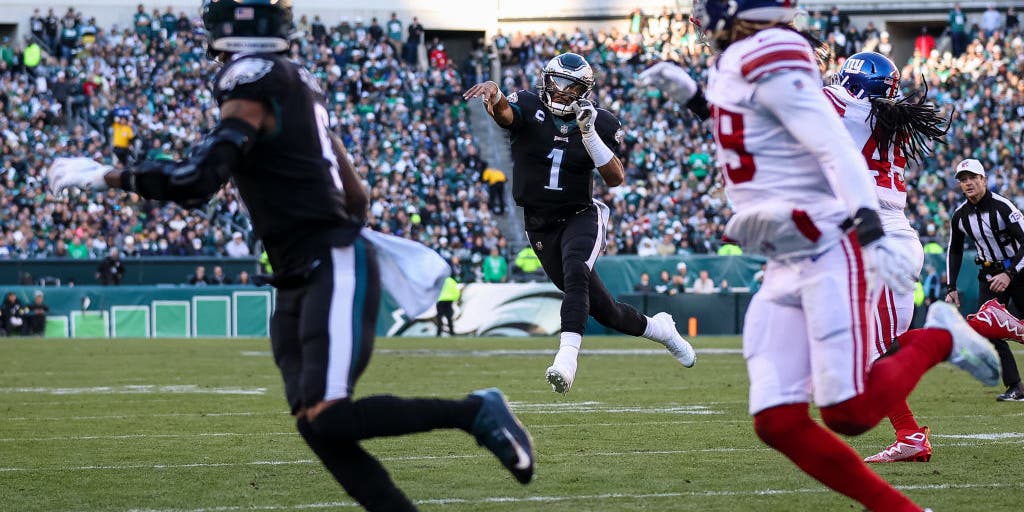 5 NFL games where the weather was a key player.

EAST RUTHERFORD, NJ. – There’s nothing like divisional games in the NFL, and there’s a great one for Sunday when the Philadelphia Eagles take on the New York Giants at MetLife Stadium.

The Eagles have been perfect on the road this season (5-0) and could clinch their playoff berth with a win or tie on Sunday. Meanwhile, the Giants currently sit in sixth place in the NFC standings after pulling out to a tie against the Washington Commanders last week.

The Giants have reached a difficult point in their season. After a 6-1 start, they have slid in recent weeks to a 1-3-1 record. But a win over the Eagles could help get their season back on track.

And the weather can play a hand in that.

A fast-moving system will sweep across the Northeast on Sunday and Monday, when snowflakes could fly as far south as New York’s Hudson Valley and southern New England for the first time this season.

Much of the Interstate 95 corridor has yet to pick up any measurable snowfall this season. While most of this upcoming snowfall will remain confined to the interior of the Northeast, the FOX Forecast Center I can’t rule out some snow trying to creep into some of the bigger cities.

Snow forecast for the Northeast on Sunday and Monday.

A light covering of snow is also possible as far south as the far north of New Jersey, but closer to I-95, there will likely be more rain than snow, especially from New York City and points south.

There could be a mix of rain and snow in East Rutherford, New Jersey during a Philadelphia Eagles and New York Giants game, but any precipitation that falls is likely to be rain as temperatures are expected to be around 40 degrees. .

When it comes to choosing games, we never know how much of a factor the weather can or will play. Usually teams are picked because we think they have better players, but what about picking a team solely based on how they have historically performed in certain weather conditions?

WHICH NFL TEAMS DO BEST IN THE COLD?

Well, that’s what we can do, thanks to sportsweather.

sportsweather has its own metrics system that collects historical weather data at game time and compares it to the historical performance of NFL teams and players.

The ambient temperature is expected to be around 35 degrees at game time on Sunday. At that temperature, historically, the Eagles are 29-24 and the Giants are 23-22.

Jalen Hurts #1 of the Philadelphia Eagles throws a touchdown pass to DeVonta Smith #6 against the New York Giants during the second half at Lincoln Financial Field on December 26, 2021 in Philadelphia, Pennsylvania.

There is currently a 54% chance of precipitation on Sunday during the game, which could be due to that combination of rain and snow. When that happens, the Eagles stand at 7-5 and the Giants go at 7-8.

TO CHOOSE: SportsWeather.com gives the Eagles the biggest weather advantage and predicts they will beat the Giants.

Be sure to check back with SportsWeather on game day as the weather can be unpredictable and may change from the current forecast.

Both teams are used to playing in sloppy conditions, and the potential mix of rain and snow shouldn’t affect two key players who should be in their fantasy lineup this Sunday.

Let’s start with Eagles quarterback Jalen Hurts. Last week was great for Hurts, both in reality and in fantasy. He threw for 380 yards and accounted for over 30 fantasy points.

According to SportsWeather, with Hurts being able to use his legs as well, they expect an increase in his average fantasy point production this week.

PHILADELPHIA, PA – DECEMBER 26: Jalen Hurts #1 of the Philadelphia Eagles in action against the New York Giants during the first half at Lincoln Financial Field on December 26, 2021 in Philadelphia, Pennsylvania.

On the other side of the ball, you can’t forget Giants running back Saquon Barkley. He has a touchdown in five of his last six games and has the fifth most fantasy points among running backs.

The Eagles have beefed up their run defense, so it may be difficult for Barkley as the focus of the defense will be on him. SportsWeather expects the weather to cause a slight decrease in his fantasy production by .21 points.

Week 14 in the NFL marks the end of the fantasy football regular season, so here’s hoping these two players can help their teams make the playoffs.