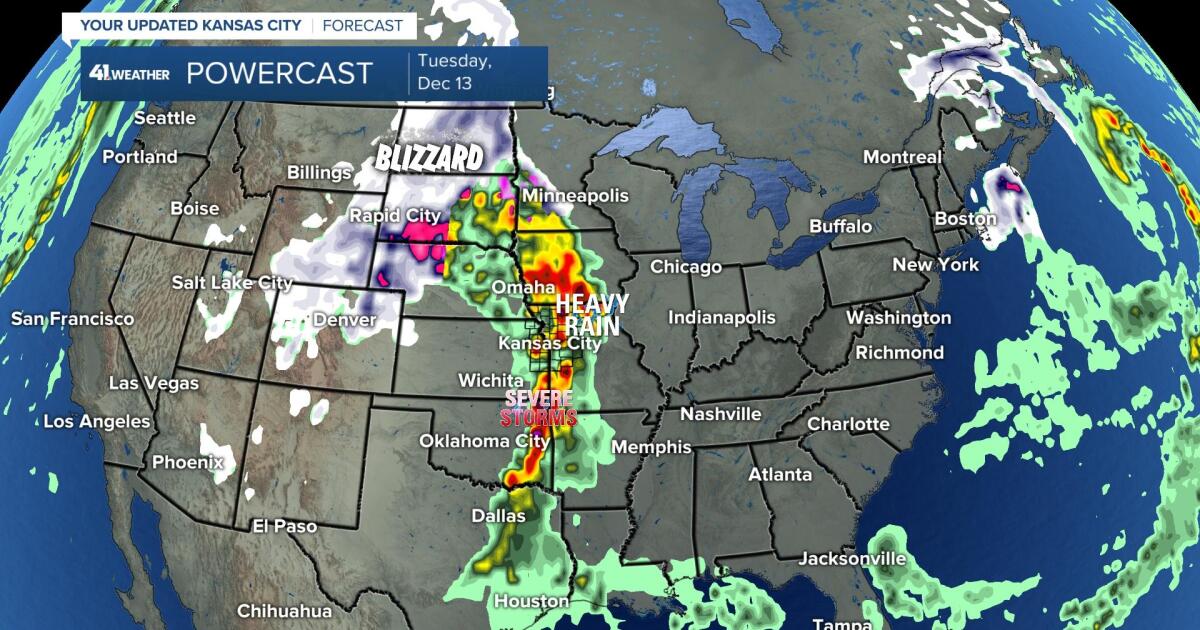 We are getting into a rather interesting and strange weather pattern as the upper level flow becomes blocked.

This is the upper level flow for Tuesday. There is a large upper low in Nebraska, another in New England, and a third off the Oregon coast. In southern Canada we have upper level summits and ridges. This is a classic lock pattern, as the flow of the upper level looks like a puzzle.

What does this mean?
Storm systems will begin to move quite slowly. So the big storm in Nebraska will hit Monday through Tuesday and won’t be out until Friday. It will actually weaken in place.

We are tracking the big storm next week, but a smaller one will follow the region tonight.

Heavy rain and a few thunderstorms will cross Oklahoma, Arkansas, southeastern Kansas, and southern Missouri between midnight tonight and noon Saturday. It’s likely to rain 1 to 2 inches down there. Some rain/drizzle may creep north into KC from midnight tonight through 9am Saturday. North of KC there is almost no chance of seeing rain, maybe some fog.

The big storm will reach its maximum strength Tuesday through Wednesday. Blizzard likely across northern plains with possible severe weather on southern plains. KC is in the middle and we have a decent chance of seeing 12 hours of sometimes heavy rain and a few thunderstorms on Tuesday. It will be too cool around here for severe weather.

After the rain band much cooler air will be seen moving in and some snow showers are possible Thursday through Friday.

The wind will also be gusty with this storm.

Look at the possible amounts of snow with this big storm. The Dakotas can see 6″-14″+ of snow with 30-50 mph winds. This is also known as a blizzard.

This storm will most likely not bring any accumulation to KC, but there will be a 1-2 chance of snow before Christmas. This puts our probability of a “White Christmas” at 30-40%, which is above average.

We’ll have more on this wild weather pattern over the weekend.

Have a great weekend and stay healthy.