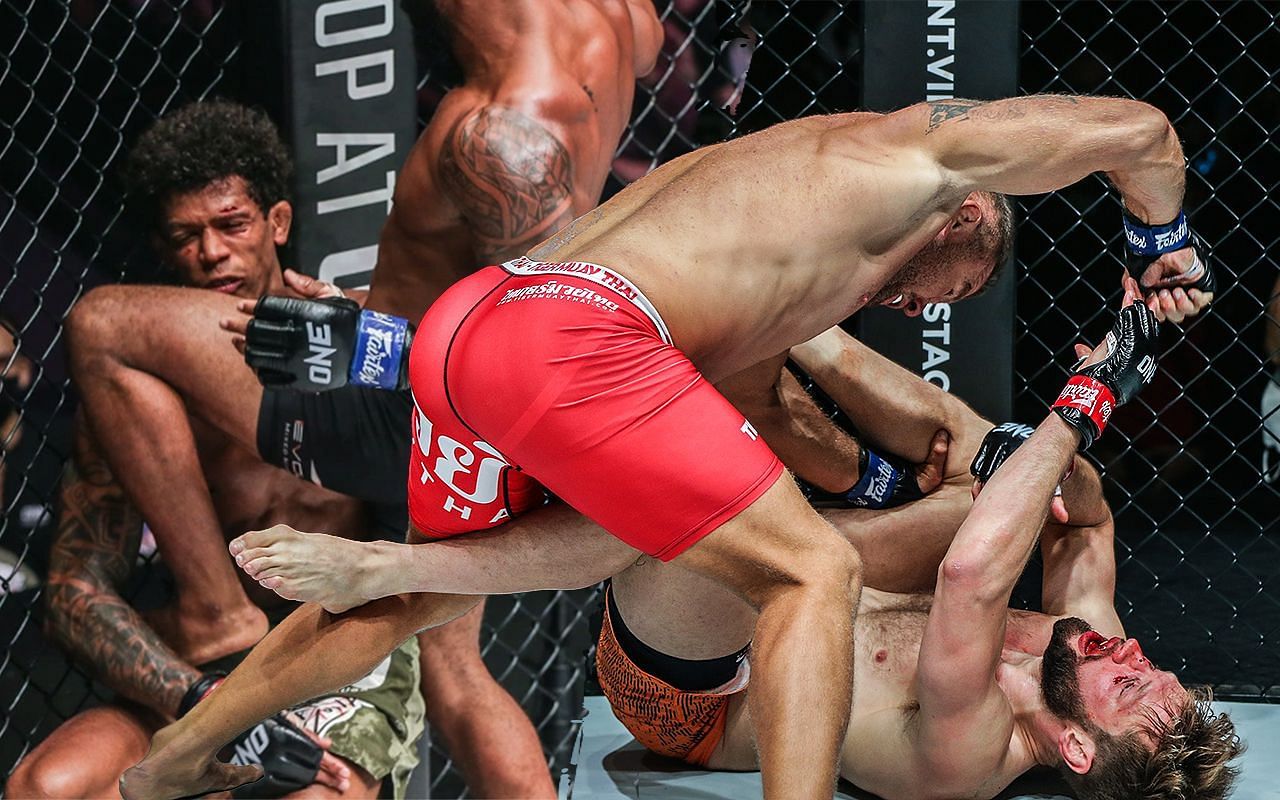 ONE Championship’s partnership with Amazon Prime Video has been an absolute win, both figuratively and literally. Since the promotion’s ONE on Prime Video debut in August, fans have been treated to some of the biggest finishes in the promotion’s history, including shocking upsets and new world champions. Let’s take a look at the best and most brutal knockouts on Prime Video in 2022.

Fresh off his victory over Ok Rae Yoon to reclaim the lightweight world title, Christian Lee returns to the ring to challenge Kiamrian Abbasov for the Weltweight title. Moving up a weight class, many felt the size difference would be too much for Lee to overcome.

That proved to be mostly true as Lee was nearly finished in the opening round after Abbasov landed a brutal flurry of blows that numbed ‘The Warrior’, but he persevered, as the Lee family often does.

Christian Lee, who survived the first round, slowly began to take over before dropping Abbasov to the mat with a big takedown in the fourth round. From there, Lee mounted the big man and controlled a series of elbows, prompting the referee to intervene and stop.

Christian Lee TKOs Kiamrian Abbasov to become one double champion in the main event of ONE on Prime 4 https://t.co/DPTPm4hSgR

In April 2021, Demetrius Johnson suffered the first knockout loss of his mixed martial arts career against then flyweight world champion Adriano Moraes. 16 months later, ‘Mighty Mouse’ got his revenge in spectacular fashion. Stepping into the ring for the ONE on Prime Video main event for the first time, Johnson looked as sharp as ever in his second time as ONE World Champion.

With just over a minute to go in the fourth round, Johnson landed a solid right hand that connected well, sending Moraes back to the fence. Johnson timed it right and caught Moraes in the chin with a flying knee, instantly putting his lights out. It was sweet revenge for the pound-for-pound greats who suffered a similar fate in their first encounter.

Muay Thai legend and 7-time bantamweight world champion Nong-O Gaiyanghadao defended his title in spectacular fashion in the co-main event of ONE on Prime Video 1 on August 26.

Stepping into the ring against fearsome British fighter Liam ‘Hitman’ Harrison, many believed that Harrison’s frenetic fighting style could be enough to upset Nong-O, who has never lost in the ring to this day.

Coming out for the opening round, Nong-Oh immediately began working on Harrison’s lead leg, cutting it down with heavy calf shots. Two minutes into the first round, Nong-Oh landed a brutal kick that connected with Harrison’s knee, knocking him down instantly. Even though Harrison was given 10 points, it was clear from the moment he went down that the fight was over.

It was a disappointing finish for Harrison, but another spectacular finish for Nong-O Giangdao, who secured his 264th career win.

Russian juggernaut Anatoly Malikin delivered the most shocking knockout of the year at ONE on Prime Video 5. Despite entering the main event with the interim heavyweight title and an undefeated record, many counted Malikin against ‘The Dutch Knight’ Rainier de Ridder. He put his light heavyweight championship on the line in the main event show.

De Ridder entered the bout as an undefeated two-time world champion who had walked through practically every opponent with his world-class Brazilian Jiu-Jitsu skills. The biggest key to Malykhin’s victory was staying on his feet, where he had an undeniable advantage. ‘Sladkiy’ did just that, lighting up the Dutchman on the feet and successfully fending off each of his takedown attempts.

With less than a minute to go in the first round, Malykhin landed a massive right hand that sent Reinier de Ridder crashing to the mat. Smelling blood in the water, Anatoly Malikin landed a series of hammer blows on the Dutchman until his lights went out. The win moved Malykhin to 4-0 in the circle and 12-0 overall.

Over five events on the Amazon Prime Video streaming service, ONE Championship has delivered some of the best combat sports action in the world. The promotional trend will continue in 2023 with ONE on Prime Video 6 coming to Prime Video on January 13.

In the main event, Supebon Sinha Marvin will defend his featherweight kickboxing world title against No. 1 ranked contender Chingiz Alazov. Fans will see the return of Stamp Fairtex when she faces Muay Thai specialist Anissa Meksen in the promotion’s second mixed-rules bout.

Rounding out the stacked card will be the return of ‘The Iron Man’ Rodtang Jitmuangnon, who will meet two-time ISKA Kickboxing World Champion Daniel Puertas in a highly anticipated kickboxing bout.