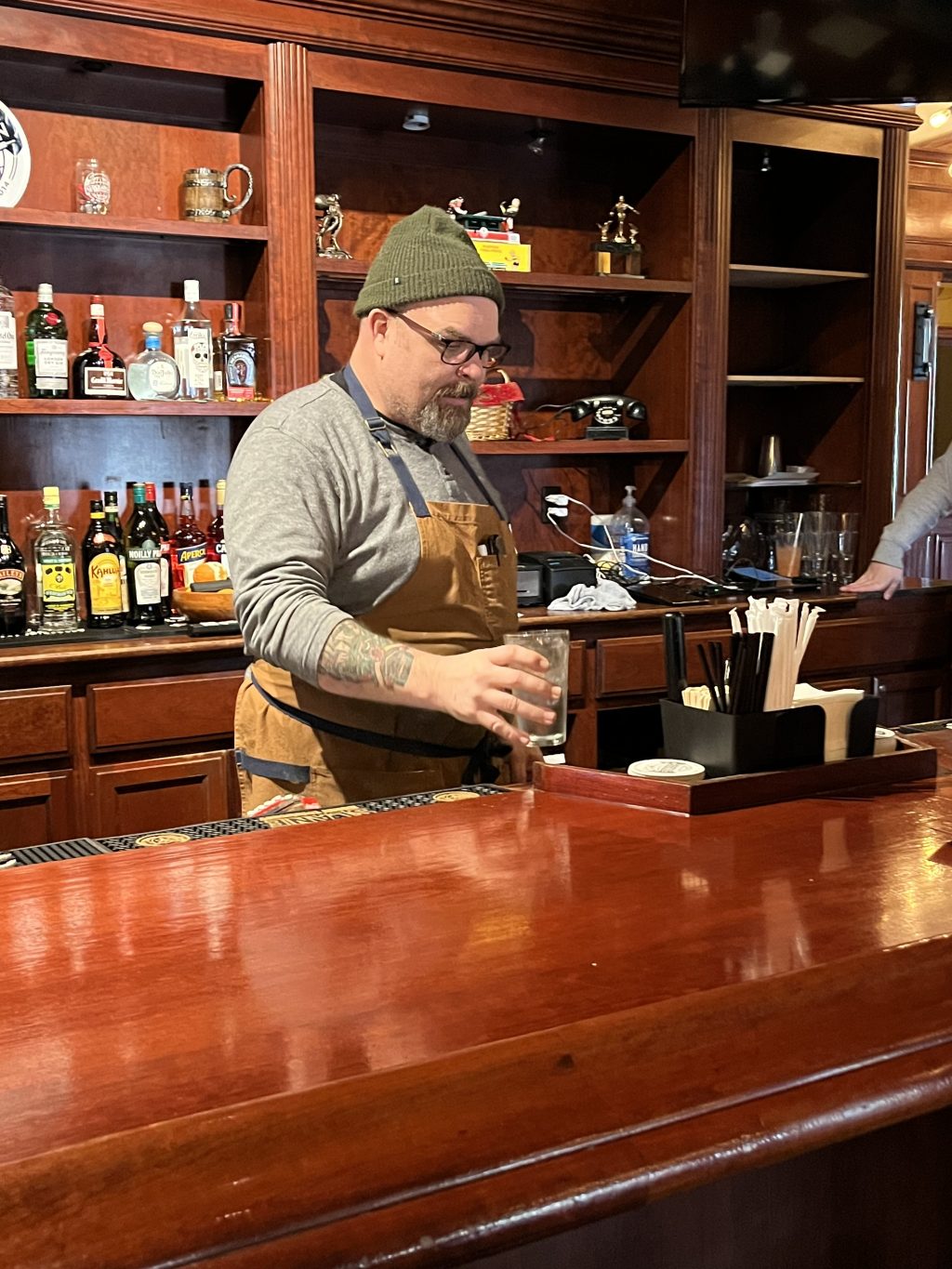 CHICO – When I walked into the new Discovery Bar on Wednesday, my first thought was how big it was.

From the parking lot, it doesn’t look like much, but when I walked through the front door, I was struck by how much space and light there was. It’s a wonderful place. I noticed a beautiful wooden bar that looked like it was in the 1950s. I also loved the gray leather bar stools and noticed the stackable serving tray made of records that sat on one of the small tables in the lounge.

I was greeted by a guy who was there with a group of guys, and then I met the bartender, Luke Hyde, and the owner, Matt Hunter, who were both very friendly and accommodating.

Hunter gave me a tour before we sat down for the interview. There’s a lounge-y type area with furniture and a television, and a large patio where Hunter plans to host events, a dining area and a great room designated for private parties. He plans to put pinball and other fun games in the private area and host theme nights like game night, trivia and comedy. He also plans to play on television. The restaurant can seat around 100 people.

Hunter was a chef for many years and co-founded Federation Brewing in Oakland. He had been working on running a business in Chico for a while. Hunter and his wife both graduated from Chico State and Hunter lived in Chico for 10 years. Six years ago, he and his wife moved back to Chico and started their family. They also have family in town which is a reason for them to go back.

Hunter’s signature dish is shrimp and grits and a disco chicken sandwich, modeled after the Nashville hot chicken sandwich. Hunter has a bit of a Southern and Caribbean theme to his food. He also serves a Haitian slaw called remoulade and pickles on a potato bun.

“I’ve found recipes that I’ve made and put them in,” Hunter said. “I’ve always loved cooking with big, bold flavors.”

The hamburger on the menu is the Smash Burger, which is like a “kicked up” version of the Big Mac with Hunter’s own spread, lettuce, onion and pickles. His misty noodles are “surprisingly popular.”

Hunter said his food is a melting pot of cuisine with Southern and Caribbean influences, along with South American and French influences. Hunter has served some meals in the past and was the head chef at Discovery.

Hunter is currently hiring bartenders and cooks. To apply, visit Discoverybarchico.com. He currently has 12 employees, but hopes to eventually have a larger, full staff.

Hunter chose the location for the bar and restaurant because he was “fascinated over the years” and was looking for a location with a patio and good parking.

Hunter’s signature drink is a cockito. It is made with white rum, sweetened condensed milk, coconut, cinnamon, nutmeg and vanilla.

“The food is always good and you can meet friends and hang out in the lounge,” he said. “It’s a family-friendly place. It’s a place where you can feel comfortable and enjoy good, affordable food and drink that you can’t get anywhere else.

“I want research to be thematic,” he said. “You can explore the regions through cuisine like Bavarian cuisine and have cocktails that go with the theme.”

Hunter likes to prepare meals ahead of time so the food goes out quickly, especially for those who pop in during their 30-minute lunch break. He plans to do commercials like radio in the future.

Discovery Bar is located at 250 Cohasset Road, Suite 10. Currently the restaurant is open Tuesday through Saturday from 11 a.m. to 3 p.m., but the hours will eventually change. Phone number 399-0564. You can find the bar under Discoverybarchico on Instagram and Discovery Bar on Facebook.

Jenny Blevins writes a business column every week. To submit ideas or suggestions or ask questions, email her at jblevins@chicoer.com