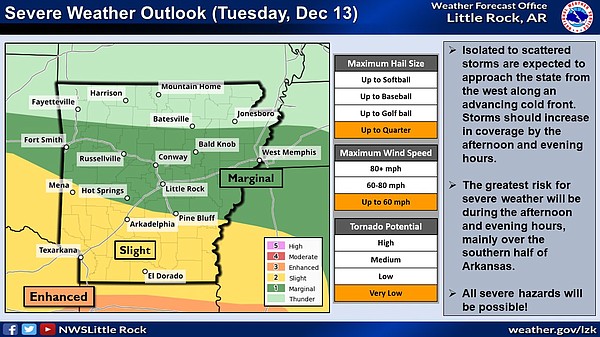 Thunderstorms are expected to enter the state Tuesday along a cold front, with the greatest chances during the afternoon and evening hours, a severe weather report from the National Weather Service said.

Some storms could become strong to severe at times, particularly in the southern parts of the state, the report from the weather service in North Little Rock said.

The weather service said all severe weather hazards are possible, including hail, damaging winds and tornadoes.

A tornado watch has been issued for parts of southwestern Arkansas, Oklahoma and Texas until 5 p.m., a tweet from the National Weather Service said Tuesday.

Today’s storms could produce winds of up to 60 mph and hail up to a quarter-inch in size, according to the weather report.

Excessive rain can also cause localized flooding in some parts of the state.

The storms were expected to enter the western part of the state at 9 a.m., according to projection maps from the National Weather Service.

Forecasters predicted the storm system to be mostly out of state by Wednesday morning.