The FOX Forecast Center is tracking unstable weather that could create unfavorable weather for travel over the Thanksgiving holiday weekend. Storm systems in the eastern half of the country and the Pacific Northwest could cause problems at highways and airports.

While Thanksgiving delivered anything but horrendous weather across the US, it could be a different story for Americans heading home as the FOX Forecast Center tracks a storm system that has the potential to cause some travel delays from the South to the Midwest and East. the holiday weekend.

On Saturday, the main storm system will begin to move away from Texas, with the rain gradually spreading from southern Kansas and southern Missouri to the central Gulf Coast. The rain could be heavy at times and may also be accompanied by thunder and lightning in some places.

Rain totals of 2 to 3 inches are expected by the end of the weekend from Texas to Georgia when taking into account all rainfall Wednesday through Sunday.

Some of those areas could see higher totals of up to 6 inches, especially in parts of southeast Texas, Louisiana, southern Mississippi, and southwestern Alabama.

THANKSGIVING TRAVEL 2022: WHERE CAN TRAVELERS EXPECT FLIGHT DELAYS AND CANCELLATIONS? 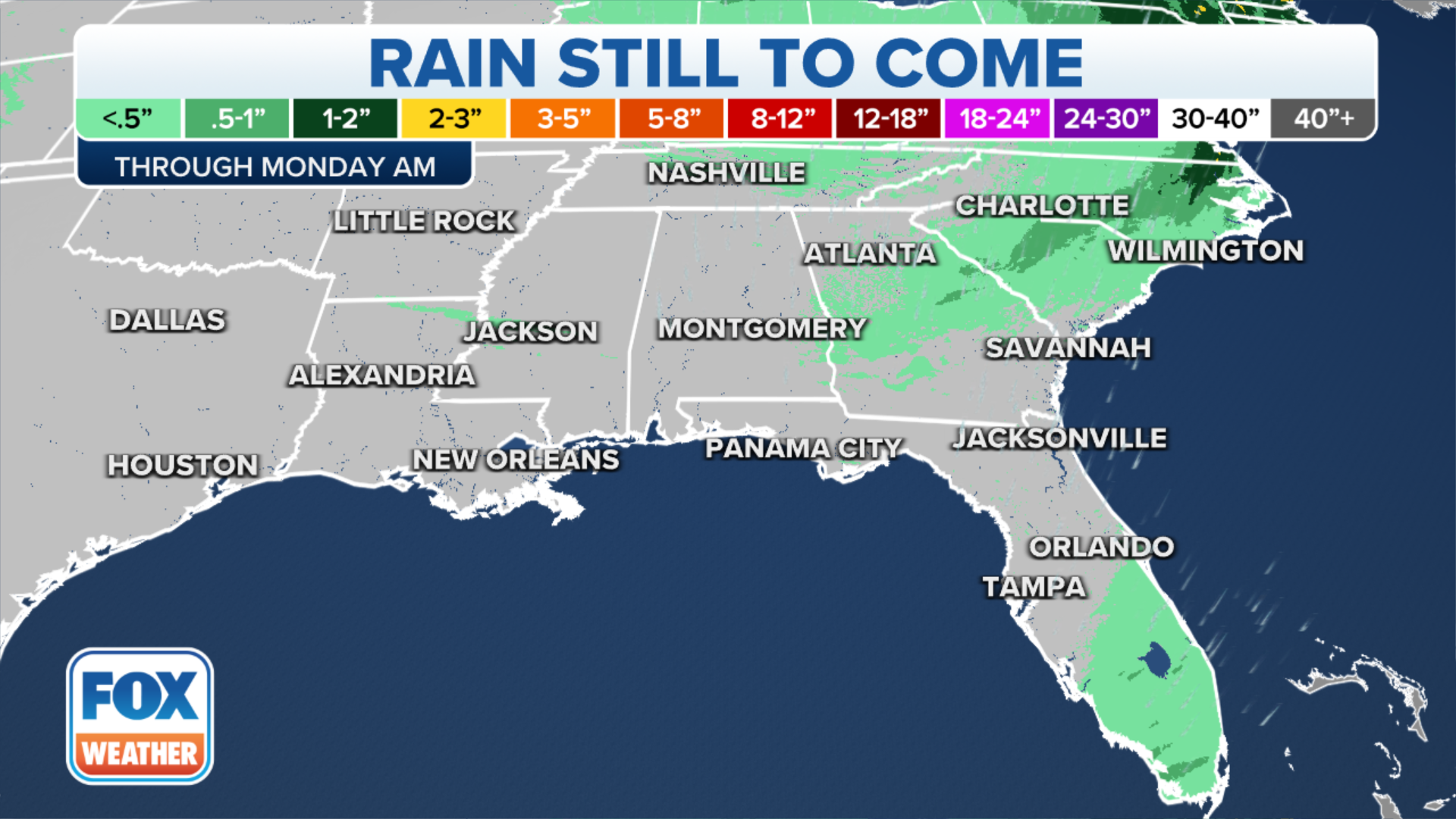 By Sunday, the storm system will move into the Ohio Valley and the East Coast, with periods of rain expected from Chicago to New York City, Boston and south into the mid-Atlantic and Southeast.

The rain is likely to affect road and air travel for those returning home after Thanksgiving. Be prepared for delays at some of the major hubs in the region.

The FOX Forecast Center is tracking a powerful storm that will move from Texas to Maine and bring a large area of ​​torrential rain, flooding and some severe storms to the eastern half of the contiguous United States.

“By Sunday morning, it’s going to be a drench from the lower Great Lakes through the Ohio River Valley and into the Carolinas,” FOX Weather Meteorologist Kendall Smith said. “Then this system continues to progress north and east so we start to dry things out for people further west and south, but we’ll still be dealing with rounds of heavy rain for locations in New York, all the way across the Delmarva and even into the night hours”.

The good news is that this appears to be primarily a rain event. Any snowfall, should it occur, will be limited to the higher elevations of northern New England.

WHAT ARE THE WORST AIRPORTS TO FLY TO DURING THE WINTER? 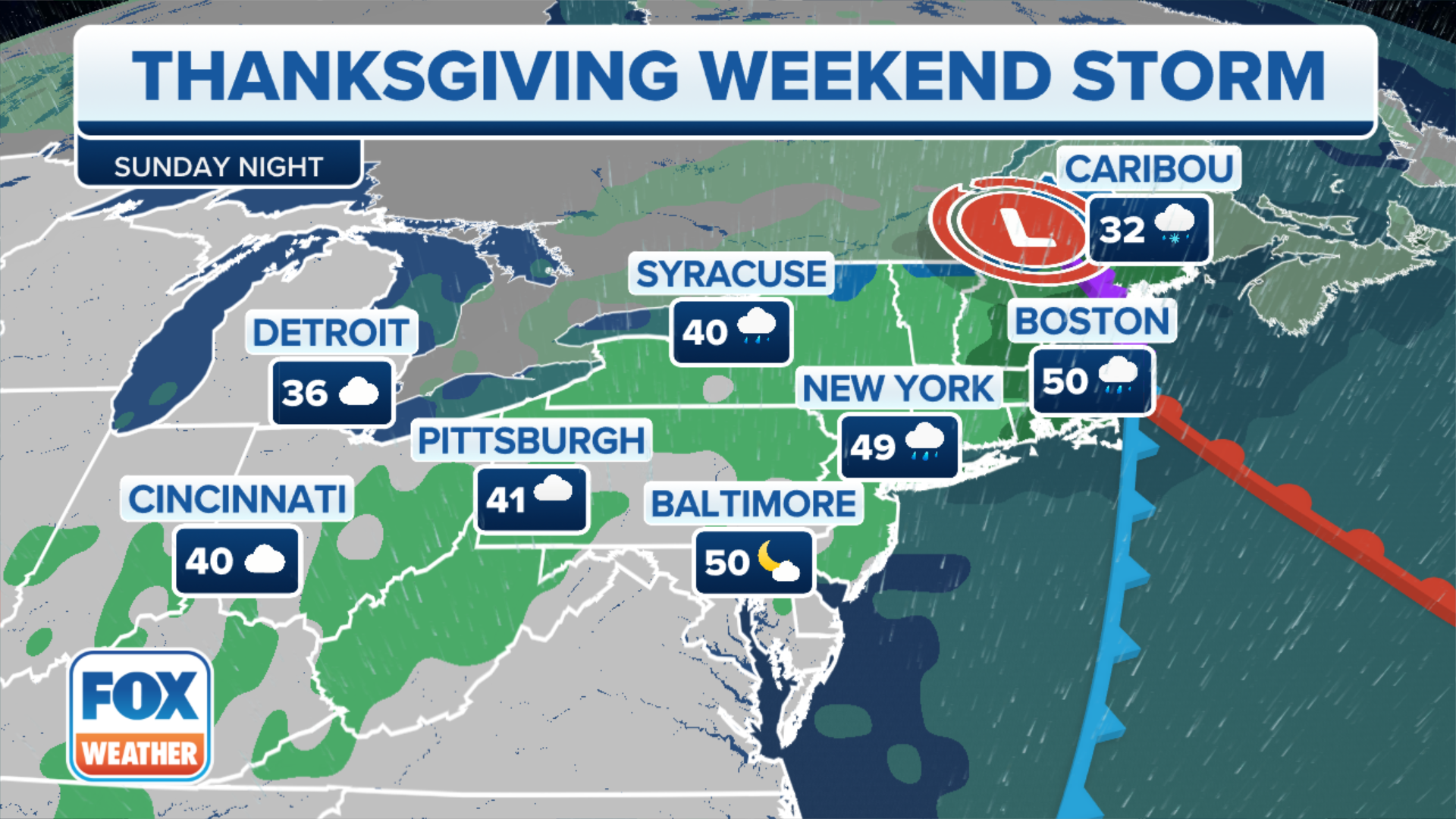 Stormy in the west too

A strengthening storm system will slam into the West Coast on Sunday and remain over the western US until the middle of next week.

While specific details, such as rain and snow totals, remain unclear, the FOX Forecast Center said there is a chance for significant snowfall in the mountains and heavy rain in the lowlands and near the Pacific coast.

WHAT ARE THE ODDS OF A WHITE THANKSGIVING?

Winter weather advisories are for a few inches of snow and ice accumulation. This will make traveling treacherous on Saturday morning.

At this time, it appears that the most likely location for heavy snowfall will be the Washington and Oregon Cascades.

Winter storm watches are in effect for the Washington and Oregon Cascades Saturday night through Monday morning for up to 10-20 inches of snow, raising potential travel headaches for those trying to drive. home through the mountains over Thanksgiving weekend.

Meanwhile, heavy rain could reach as far as Southern California on Monday night. Gusty winds are also expected in the Four Corners region early next week.

Snow and rain forecast in the west this weekend through early next week.