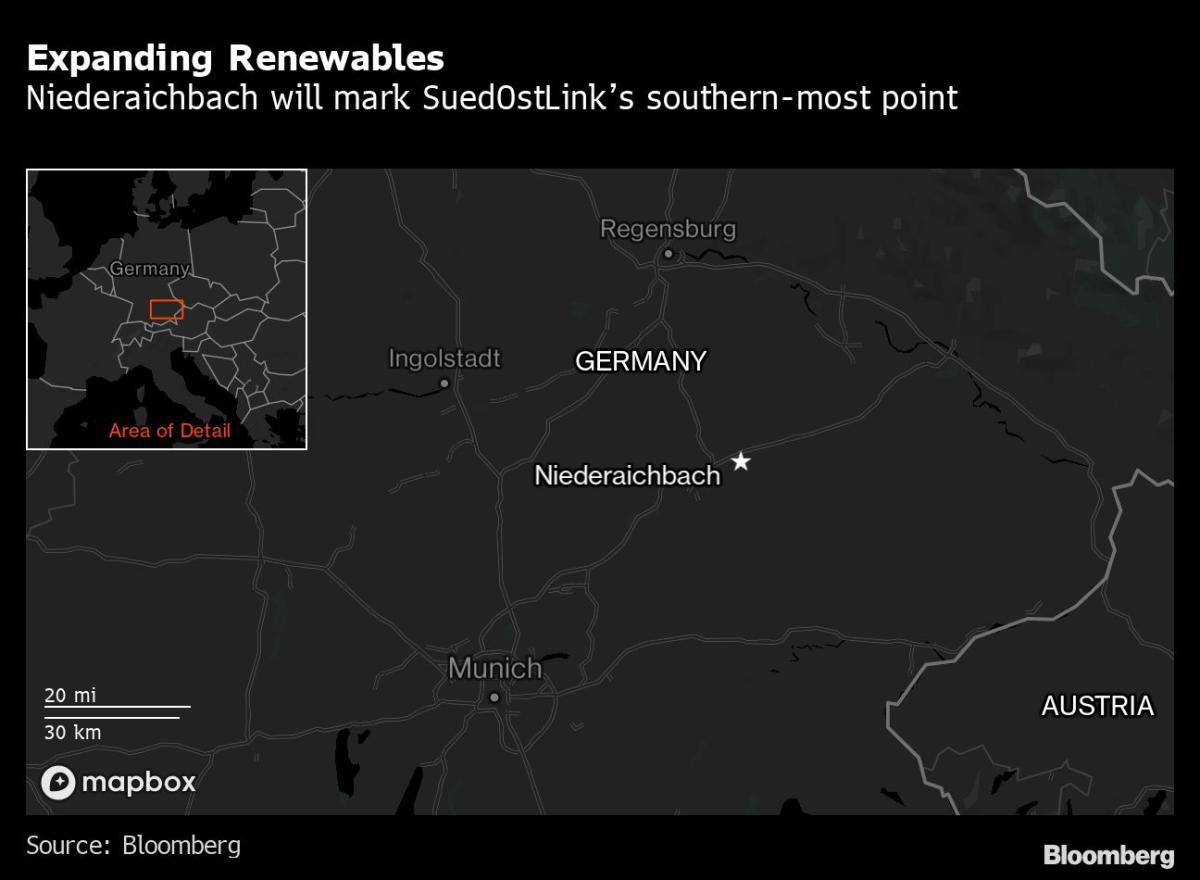 Most Read from Bloomberg

The Bavarian town of Niederaichbach has long opposed a high-voltage line crucial to the transmission of Germany’s renewable energy. It took a war and country-wide blackout warnings to quell the residents’ resistance.

SuedOstLink is one of two major electric highways that will bring offshore wind energy from Germany’s northern coasts to its industrial centers. Niederaichbach — just a few kilometers from Germany’s largest car factory, BMW AG — will mark the southernmost point of the network.

Its residents only recently allowed the plan to move forward after years of legal action to stop it. In 2020, the city sued the construction project — which includes a massive inverter — because it hoped to use the space for preservation and was concerned about how it would look.

The city’s recent change of venue is good news for Germany’s slow-moving efforts to expand renewable energy, but it’s also a reminder of simmering resistance across Europe. As an energy crisis weighs on the region, citizens are forced to weigh the political and environmental risks of relying on fossil fuels and the potentially obtrusive aesthetics of electric cables and modern windmills.

The stakes for Germany are particularly high: the economy faces the threat of deindustrialization if it cannot secure an affordable energy supply. It is also under pressure – as a member of the most polluting bloc – to contribute to Europe’s efforts to go green and help tackle the climate crisis.

“We need transmission lines to increase our energy independence and make the energy transition successful,” said Josef Klaus, mayor of Niederaichbach, in an interview with Bloomberg. In a sign of how quickly the mood has changed, a city leader was recently quoted in February as saying he was “disappointed” by the court’s ruling in favor of the power line.

The energy crisis that followed Russia’s invasion of Ukraine was key to reducing his and the city’s opposition to SuedOstLink, and it appears to be melting resistance to projects elsewhere as well. Germans are facing higher inflation than at any time since the end of World War II, and citizens are wary that pressure on a manufacturing-heavy economy could lead to production shutdowns and job losses.

“People see renewable energy as key to greater independence,” said energy sociologist Katja Witte of the Wuppertal Institute, adding that “regionally produced and used energy can provide a sense of control and trust.”

Research shows that public opinion is increasingly in favor of green energy, and legislators have also commented on the shift taking place on the ground.

Lisa Badum, a Green Party politician, said her home district in Bavaria has only had one onshore turbine since 1999, but four to five wind sites are now being planned. Many who were previously against the wind farm – particularly conservative forces – are now voting for it, he says.

Similarly, Social Democrat Timon Gremmels said that the forest near his home, Reinhardswald in central Germany, used to be very active against wind activists. But resistance has “clearly been declining” since Russia invaded Ukraine in February, he said in an interview.

This leeway has given the federal government the ability to relax regulations in favor of renewable energy operators. Onshore wind farms have been allowed to operate at higher power at night, even if it makes a bit more noise. Biomass plants, which burn plants and other organic materials, have also been given the go-ahead for high production, although they usually cause unpleasant odors.

Chancellor Olaf Scholz’s coalition raised the nation’s renewable energy target from 65% to 80% by 2030 and passed 25 energy-related laws or regulations in the first three quarters of this year, a feat hardly achieved by any government before.

The new legislation, which took effect in January, says clean energy is “in the overriding public interest and serves public safety.” Still, the country is expected to miss its climate targets this decade, according to experts advising the government, and an environmental performance ranking shows Germany lagging behind, largely due to slow progress on clean energy.

Despite signs of improvement, local resistance has not ceased to be a challenge to Germany’s green transition. The town of Oederan, which is in the former communist eastern bloc of countries where the far-right and climate-skeptic Alternative for Germany is very strong, is scrapping plans to build nine wind turbines with an annual capacity of 135 kilowatt hours. Residents, politicians and the local government claim that the wind farm would obstruct the picturesque view of the 13th century church.

Although communities can benefit considerably from local land parks – the law even obliges managers to share profits with residents – locals often fear that they could lose out if, for example, new development causes property values ​​to drop. They have many opportunities to oppose new projects.

Time-consuming planning processes for renewable facilities are also a major problem for companies in the sector. Federal states take between 14 and 58 months to issue permits, leaving Germany dramatically behind the EU’s one-year recommendation. Some procedures take up to three times longer than allowed, according to a survey by Germany’s largest industry association BDI.

During the state’s last election campaign, Scholz promised to cut red tape for renewable energy. Consent for wind turbines, for example, should not take six years, but six months, he once said.

“Together, the bureaucratic processes around wind, solar and grid expansion can take up to 15 years,” says Simon Mueller, director of the German energy think tank Agora Energiewende. Although the federal government is aware of the problem, it has limited ability to change it, as such decision-making is largely in the hands of state agencies.

If districts and communities also want to have a say, it quickly creates so much paperwork “that three turbines can fill 70 folders,” said RWE AG Wind Onshore CEO Katja Wuenschel during a recent panel discussion. RWE, the renewable energy giant, has repeatedly warned that these delays make Germany less attractive for investment.

Meanwhile, planners in Bavaria’s Niederaichbach are just a little more hopeful. Despite clearing the hurdle of local resistance, the energy highway is still years away from easing Germany’s energy woes, with specific construction plans only just beginning. The federal regulator expects the entire power line to be up and running by 2030.

–With help from Chris Reiter.

Most Read from Bloomberg Businessweek