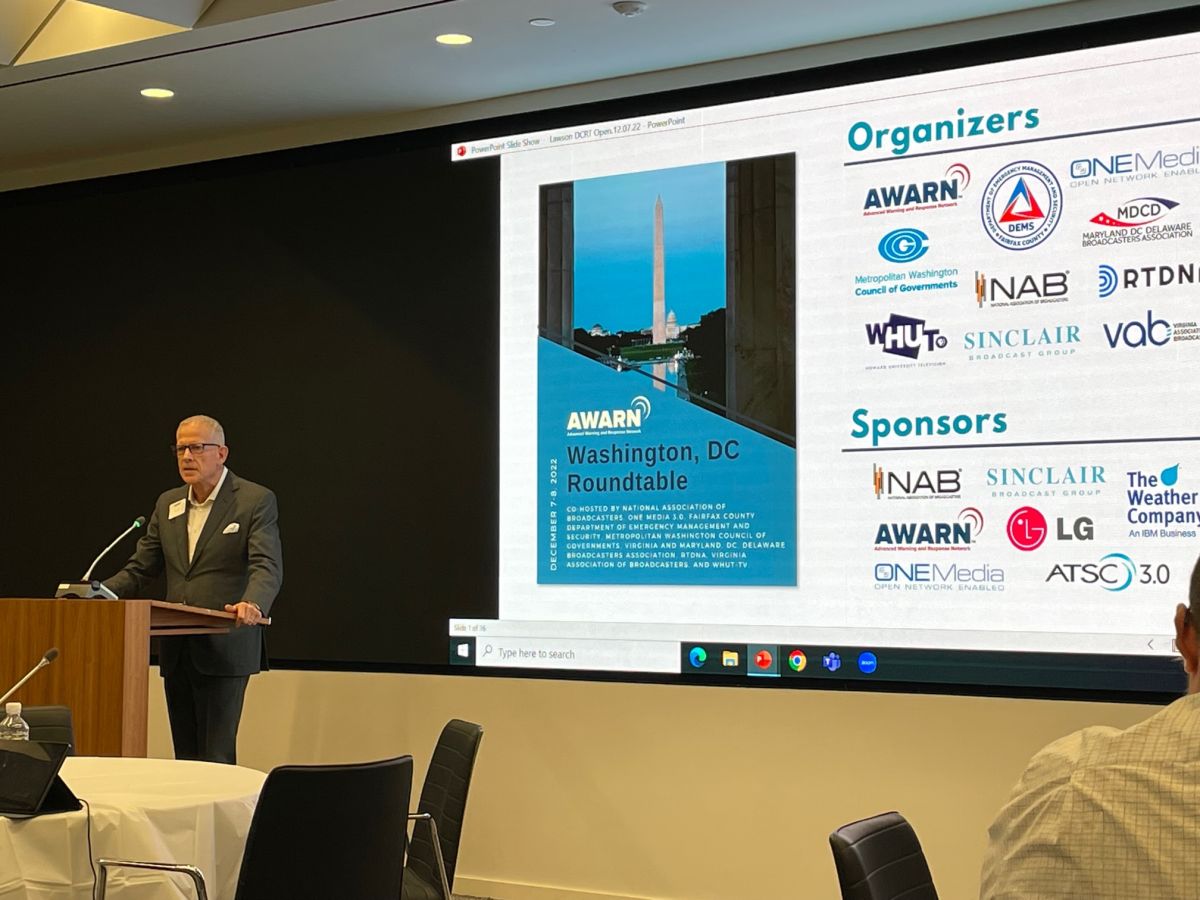 The meeting, held at NAB headquarters here last week, was part of a series of roundtables sponsored by the Advanced Warning and Response Network (AWARN), a coalition of broadcasters, government officials and manufacturers working to develop a new Advanced Emergency Warning Service for ATSC. 3.0 in aviation.

ATSC 3.0’s capability to combine broadcasting with IP brings the promise of more detailed and targeted information that can be sent to the public during emergencies. This ability—for broadcasters—which must meet FCC requirements for security and reliability—could make a critical difference in a world where the cellular services consumers rely on every day are highly vulnerable and prone to failure. Storms including Hurricane Ian.

What kind of information, how it is delivered and how best to broadcast it to a myriad of devices was a key topic of discussion at the meeting. Gerald Fritz, executive vice president of strategy and legal affairs for One Media, a division of Sinclair Broadcast Group, emphasized the importance of improved mobile reception to the broadcasting community when developing ATSC 3.0; Something that couldn’t be achieved in 1.0.

“What we’re driving now is mobility — we can put it on your tablet, on your laptop or on your phone,” he said. “That’s important in the field of emergency information.”

On a TV or mobile device screen, Fritz showed a variety of screenshots showing various layouts, from maps of escape routes to sources of additional information, weather maps, school closings, emergency updates, etc. However, how to deliver it can be daunting.

During a demonstration of its emergency alert app that showcased such features, Kevin Wong with ONE Media discussed how the company approached its development.

“There’s a lot of potential here to display more information that you expect on the web, including an enhanced experience,” he said. “It’s really just a matter of what information is available and making it accessible and organized. So we’re still working on improving the experience to provide more information.

Although cord-cutting has increased and the number of consumers receiving over-the-air TV has increased over the past decade, most consumers still watch via cable and/or broadband, so how do ATSC 3.0’s emergency alert capabilities fit into today’s multichannel and mobile device world if they’re not available on pay TV?

“[Broadcasters] Currently talking to MVPDs (multichannel video program distributors) … to make sure they’re going to take the 3.0 service — not just the 1.0 service — and send it to people with cable systems,” Fritz said. “That’s assuming they have electricity and power to run their TV station. Because when the power goes out, cable systems are going to drop out a lot even on working TVs. That’s why we believe it’s so important to have ATSC 3.0 on mobile devices and laptops and tablets and phones.

In that note, despite the lack of ATSC 3.0 compatibility in mobile devices, Fritz pointed to the standard’s international focus and OneMedia’s ability to offer its chip partner, Sangya Labs, based in India and the world’s second most populous country. .

“For cell phone companies, we decided to do it ourselves to show what the capabilities are,” said Fritz, who is developing the company’s Mark One Android-based smartphone with Sankya. “India is now conducting broadcast airwaves testing in Bengaluru and Delhi to show what direct-to-mobile will look like, and we hope that will be successful, and that success will be reflected here in the US.”

Solomon Brown, deputy coordinator for emergency management and safety for Fairfax (Va.) County government, discussed the evolution of the region’s emergency preparedness efforts over the past decade through the creation of the National Capital Notification System. , has streamlined the way local governments in the DMV area alert their internal departments and the public. As communications from pagers and cell phones have evolved into today’s sophisticated smartphones, the notification system has adapted to those changes.

Brown noted the increasing value of using social media for emergency communications. “A lot of our news is out on social media,” he said, “Facebook, Instagram, Twitter, it’s all connected to our notification system now.”

Brown sees ATSC 3.0 as an important addition to the menu of emergency communications capabilities, but is aware of the realities of today’s consumer choices and getting the message to where the consumer is. He thinks there is room to improve communication between local broadcasters and emergency officials.

“Basically we need better communication about who makes the decisions at the broadcast station,” he said. “Can we take you to our place where we would take you in a certain situation? What is our impulse to send the messages? Is it such an emergency that you would be more comfortable delivering the message? It’s a message, so it must be faith. Now I want you to have that.” I do not know.

“Many jurisdictions in the National Capital Region have a public affairs manager who previously worked at local stations, so we have that relationship,” he added. “But what I want to know is, ‘What do you need from emergency managers?'”

The goal of the roundtables, which will continue in Raleigh and New York in the new year, is not only to provide training on ATSC 3.0’s emergency alert capabilities, but also to improve communication between local stations and their local emergency officials to improve coordination. Use that feedback to improve the design and format of emergency, as well as 3.0 alerts.

According to John Lawson, executive director of the AWARN Alliance, the roundtables help broadcasters and government agencies open channels of communication as they adapt to the evolution of mass media. “We’re trying to build relationships,” he said. “We talk about technology, but it’s really about relationships, getting to know your colleagues and finding better ways to work together.”