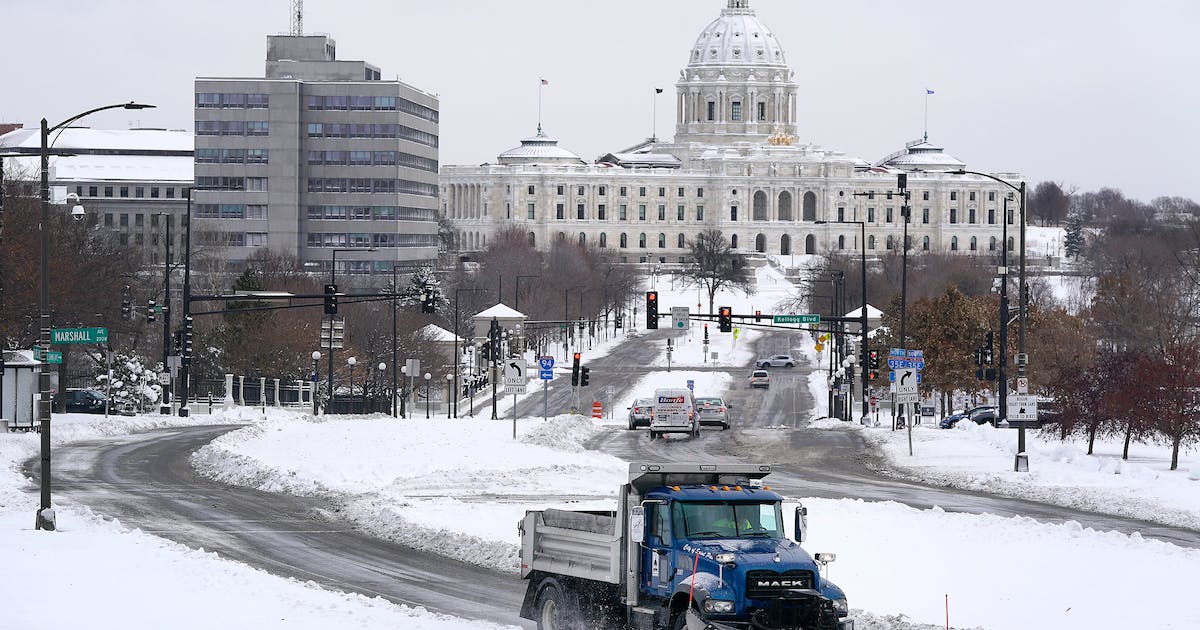 Winter weather watches and warnings covered nearly every county in Minnesota Tuesday as a powerful storm moved across the state, bringing snow, rain, sleet, ice and strong winds that were expected to last through Saturday.

“Almost everyone in the state is going to be affected in some way or form in the next few days,” said Brent Hewett, a meteorologist with the National Weather Service in Chanhassen.

Dozens of schools in west-central Minnesota, where winter storm warnings for 2 to 6 inches of snow were in effect through early morning and noon Wednesday, delayed start-ups or closed entirely Tuesday. In southwestern Minnesota, freezing rain combined with winds gusting up to 40 to 50 mph prompted an ice storm warning through noon Tuesday, Hewett said.

In some places up to half an inch of ice could be seen, Hewett said.

“That’s a nasty kind of precipitation,” he said. “Don’t travel if you don’t have to.”

The initial wave of precipitation moved into Minnesota Tuesday morning, but didn’t reach the Twin Cities until lunchtime. Most of it was expected to fall as rain, with some freezing rain, sleet and snow. A winter weather advisory was in effect for metro and south-central Minnesota, with the possibility of accumulating 1 to 3 inches of snow, the Weather Service said.

The weather advisory also covered cities including Albert Lea and Mankato and the Wisconsin cities of Eau Claire and Hayward, according to the Weather Service.

A wind advisory was in effect for the Rochester and Austin areas of southeastern Minnesota, the Weather Service said.

Heavy, wet snow was expected to fall across the northern half of the state Tuesday, with the highest probability of 6 inches of snow or more from Alexandria to Mora and farther north, the Weather Service said.

A massive low pressure system over the central United States will inched eastward while delivering a double whammy. On Wednesday, the state will see some calm as the system stalls, but more precipitation will fall on Thursday and continue through the first part of the weekend.

The rain will wash away much of the ground-covering snow in southern Minnesota and the Twin Cities, but it will be replaced by a fresh layer of 3 to 6 inches of snow that will fall Thursday through Saturday morning.

A system that triggers alerts and warnings that affect nearly all of Minnesota’s 87 counties is a rare occurrence, something that typically happens once or twice a year.

“This is an impressive system,” Hewett said. “It’s going to be an active week.”