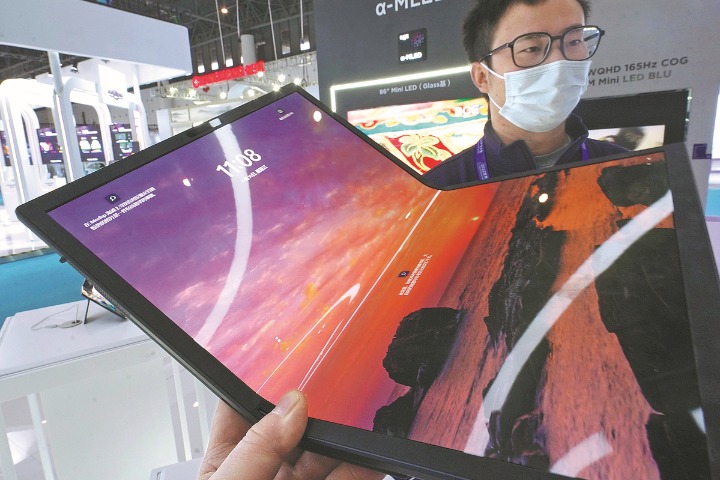 China has become an important engine in the development of global semiconductor display technologies with immense application potential in a wide range of fields such as vehicle-mounted displays, wearable gadgets, culture and education, and healthcare, industry experts said.

China’s display industry revenue will exceed 580 billion yuan ($83.2 billion) in 2021, up 40.5 percent year-on-year, accounting for 36.9 percent of the global display market, according to a report released by market research firm CCID Consulting.

The country’s annual production capacity of display panels reached 200 million square meters this year, ranking first in the world, which has greatly improved the use in smartphones, televisions, laptops, tablets and other display devices.

In addition, China’s new display industry has seen rapid growth, with a compound annual growth rate reaching 25.8 percent from 2012 to 2021.

Wang made the comments at the 2022 World Conference on Visual Industries held in Chengdu, the capital of Sichuan province, from November 30 to December 1.

More efforts are needed to continue to improve the resilience of industrial and supply chains, make breakthroughs in key technologies of the new display industry, and consolidate the important role of enterprises in promoting technological innovation, Wang added.

Liu Wenqiang, vice president of CCID Consulting, said that the new visual field, which acts as the terminal in the information age and the key field of the digital economy, is a fundamental, forward-looking and strategic field.

“As the world’s largest panel manufacturing base and research, development and application area, China has become an important engine for promoting the development of the global display industry,” Liu said, adding that display technologies have empowered many fields such as consumer electronics, digital culture, and more. Innovation and Digital Health.

Flexible OLED is a relatively new technology and part of the latest innovation in the display industry. Chinese display panel supplier Visionox Technology Inc. is focusing on cutting-edge flexible OLED technology and has launched mid-range display products including tablets, laptops and vehicle-mounted screens.

Global shipments of foldable smartphones are projected to rise 171.9 percent to about 7.21 million units in 2021, and this year the number is forecast to reach 14.4 million units, a year-on-year increase of 99.6 percent.

The demand for flexible OLED panels used in foldable smartphones will continue to rise on the back of 5G commercial applications and panel makers will need to further improve their yield rate efficiency and reduce production costs, said Li Yaqin, general manager of Sigmintel.

“The penetration rate of OLED displays in the mobile market is expected to reach 50 percent by 2024,” Li said, adding that OLED technologies will account for 60 to 70 percent of sales revenue by then.