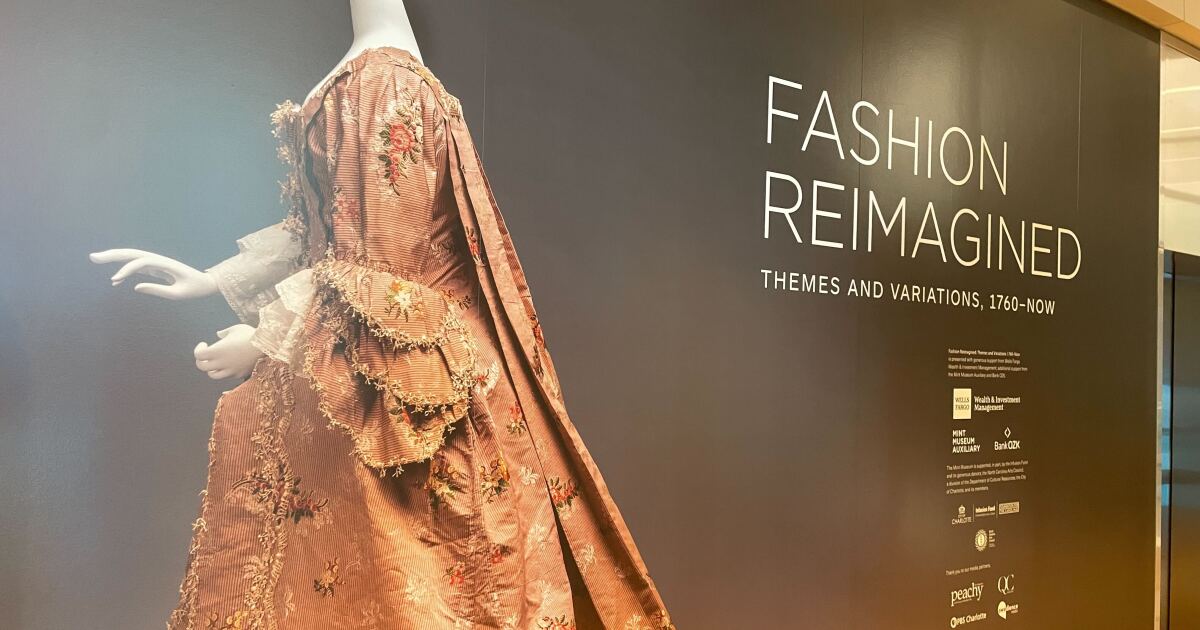 A special exhibit will be presented at the Mint Museum Uptown on Saturday, December 10th. Called “Fashion Reimagined: Themes and Variations, 1760-NOW,” the installation celebrates 50 years since the founding of its fashion collection in what is now the Mint Museum. assistant

“I want people to feel a sense of awe at how incredibly beautiful and creative these design solutions are for decorating the body,” she said.

Fashion Reimagined will feature 50 fashion ensembles chosen from thousands of the museum’s collection and will follow three themes: Minimalism, Pattern and Decoration and The Body Reimagined.

“You’re going to experience these three different strains of historicism that permeate the history of fashion,” Carlano said. “They need to feel what that is, and look and see all these details and think about what these dresses are saying about the era they were made in.”

Tae Smith, fashion and textile curator and dresser behind the exhibition, hopes visitors will appreciate the details of each piece.

“There’s so much craftsmanship that went into these pieces and just, you know, the embroidery, the hand sewing,” Smith said. “You can just look at a garment to stand in front of the garment for half an hour or an hour and just look at the construction of it.”

When dressing the mannequins, Smith said there are many things to consider, such as how the ensemble will look from different angles, the underlying structures of the pieces, how they should be worn and the preservation of the clothing itself.

One of Carlano’s points of pride was acquiring the funds for a menswear collection by Nigerian-American designer, humanitarian and filmmaker Walé Oyéjidé, which uses creative storytelling to combat prejudice. His designs have appeared in Marvel Studios’ “Black Panther,” exhibited in museums around the world, including in Spain, Germany, Holland, and now Charlotte.

“It’s almost a social experiment to use beauty as a weapon against prejudice,” said Oyéjidé. “By presenting the most beautiful picture possible, we are then forced to discard any initial prejudices we may hold towards the subject and ask ourselves what the human story is.”

On Saturday, December 10, Oyéjidé will present the premiere in North Carolina of his documentary “After Migration: Calabria” at the Mint Museum, as part of the festivities celebrating the opening of the exhibition.

Although much of the museum’s collection is focused on American and European fashion, Carlano says they are making a more focused effort to acquire pieces that reflect more global expressions of contemporary fashion. Fashion Reimagined will feature an ensemble by Indian fashion designer Anamika Khanna, making it the second US museum to do so.

“I think it will be a surprise to a lot of people, especially new to Charlotte, how amazing our fashion collection is,” Carlano said. “It’s on a par with most major museums and deserves to be better known.”

Carlano says he believes one of the shows will be an 1884 wedding dress purchased from LP Hollander and Company. The piece, which includes a bodice and skirt, is made from a variety of silk and satin and features pearl and lace details.

“I hope people will look carefully and everything because, again, out of thousands of objects, these 50 have been selected,” he said. “So they’re all very interesting in various ways.”

In addition to the sets, the exhibition will also include interactive elements. Although visitors won’t try on clothes, “Shape Shifters” is a dressing room with magnetic shapes in the mirror that will allow them to imagine themselves in pieces from the 18th and 19th centuries.

The exhibition will also be accompanied by an illustrated catalog with contributions from Carlano; Lauren D. Whitley, independent scholar and curator; and Ellen C. Walker Show, director of the museum’s library and archives; and fashion designer Anna Sui.

There will be two videos on how men and women dressed in the 18th century, which Carlano says are wonderfully educational and entertaining. For families, there will be trendy books for children to read and spaces for them to read.

“I think it’s a magical installation. I am very proud of the Mint, the amazing staff at Mint who make this all happen, as well as the consultants,” Carlano said.

“Fashion Reimagined: Themes and Variations, 1760-NOW” will be on view from December 10 to July 2, 2023 at the Mint Museum Uptown at the Levine Center for the Arts, 500 S. Tryon Street.

The Mint Museum will have free admission all day on December 10 for the Mint’s Fashion Day celebration. Other events will include a panel discussion on Fashion Reimagined and a screening of Oyéjidé’s documentary “After Migration: Calabria.” More information here.