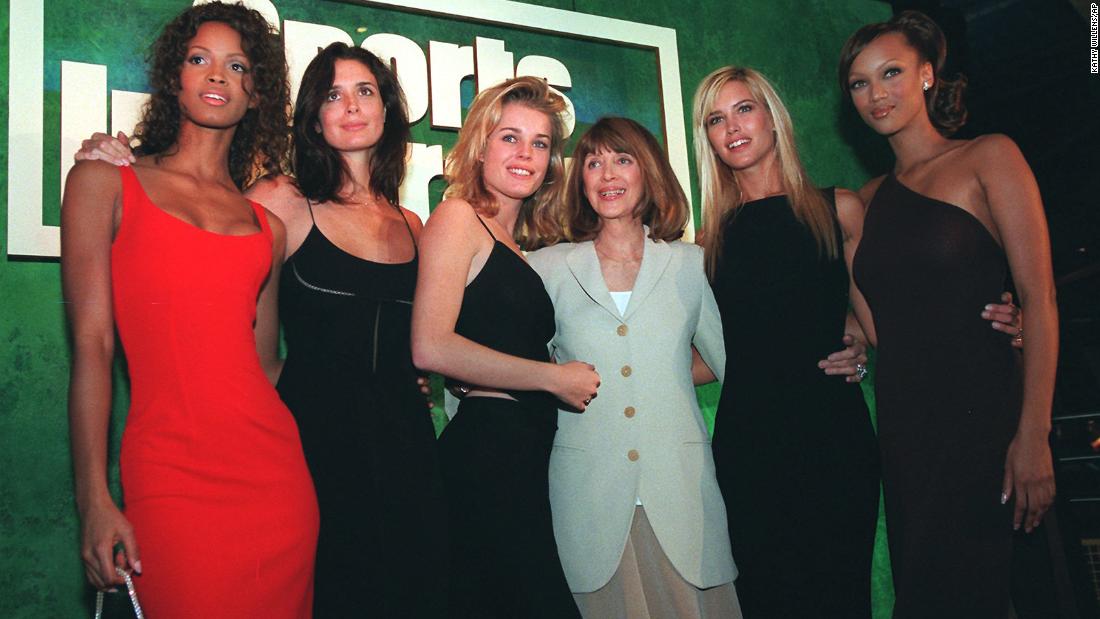 The pioneering publisher was widely credited with the growth of the iconic – and often infamous – Sports Illustrated Swimsuit Issue in a cultural institution has died at the age of 96.

Jule Campbell died on November 19 in New Jersey. She will be remembered as a “feminist pioneer” who made significant contributions to the fashion industry, according to Sports Illustrated.

Campbell joined Sports Illustrated as an assistant and reporter in the magazine’s fashion department in the early 1960s, after a stint at Glamour.

Her career took off after the launch of SI’s Swimsuit Issue, which was first suggested by managing editor Andre Laguerre to cover the magazine’s typically slow winter months.

Its first iteration—a six-page cover featuring model Babette March wearing a white two-piece swimsuit—appeared in January 1964. Campbell’s work on the swimsuit issue began the following year, quickly establishing her as a powerful figure. in the industry

Campbell (right, with binoculars) on set during a Swimsuit Issue shoot in 1995. Credit: Joan Truscio

Eschewing much of the “skinny chic” aesthetic praised by the fashion industry at the time, Campbell’s vision was clear. About her casting process, she told journalist Michael MacCambridge in an interview for his book “The Franchise: A History of Sports Illustrated Magazine” that: “I went to California because I thought we should use more natural types of women.”

“I wanted them to look like real people who were beautiful, and I think our audience related to that,” Campbell told Sports Illustrated in his obituary.

The first model he chose was a fresh-faced teenager named Sue Peterson, who appeared on the cover of the 1965 Swimsuit Issue in a black one-piece with side cutouts and a red belt. It set the precedent for decades of scantily clad white model issues and, while far from what today would be considered openly revealing swimwear, decades of reader outrage.

(As Sports Illustrated noted in a roundup of reader letters to mark the Swimsuit Issue’s 50th anniversary in 2014, the first critical letter it published in print came from a resident of Columbia, South Carolina, and read: “I certainly don’t want those pictures coming into my house for my teenage son to watch, let alone me. Think of the thousands of young people across the country that you are influencing, and don’t just do it for what may be financial gain.”)
The 1978 edition of the Swimsuit Issue broke records for the number of letters from readers after it featured a photograph of model Cheryl Tiegs (who, at the time, had already appeared on two Swimsuit Issue covers) in a white mesh swimsuit that showed her nipples . “We thought it was a throwaway photo,” Tiegs said of the controversial image in a 2014 interview with Florida newspaper the Naples Daily News.

In addition to canceled subscriptions, the Swimsuit Issue also sparked protests from groups including the National Organization for Women, which accused the magazine of objectifying women.

Campbell retired in 1996. Its final issue featured Tyra Banks, the first black model to appear on the magazine’s cover (although Banks shared the cover with Argentinian model Valerie Mazza). Other famous models who fronted the Swimsuit Issue under Campbell were Elle Macpherson, Christie Brinkley, Kathy Ireland, Paulina Porizkova and Carol Alt, among others.

Since 1997, the Swimsuit Issue has been printed as an independent issue, separate from the regular magazine. It has extended to television specials and documentaries; a reality TV series and an open casting call.

In recent years, a greater commitment to diversity in the pages of the issue meant the inclusion of plus-size, transgender and disabled models. Many athletes — including tennis players Venus and Serena Williams, Caroline Wozniacki and Naomi Osaka, skier Lindsey Von, wrestler Ronda Rousey and racing driver Danica Patrick — have appeared in the magazine and on its cover; celebrities like Beyoncé, Kim Kardashian and Megan Thee Stallion also got covers.

“Shooting the cover made me feel really empowered and happy,” Megan Thee Stallion told CNN in 2021 about her cover shoot that year. “It made me feel good to know that women who have bodies like mine can be celebrated. Not just the standard types we’ve seen before.”