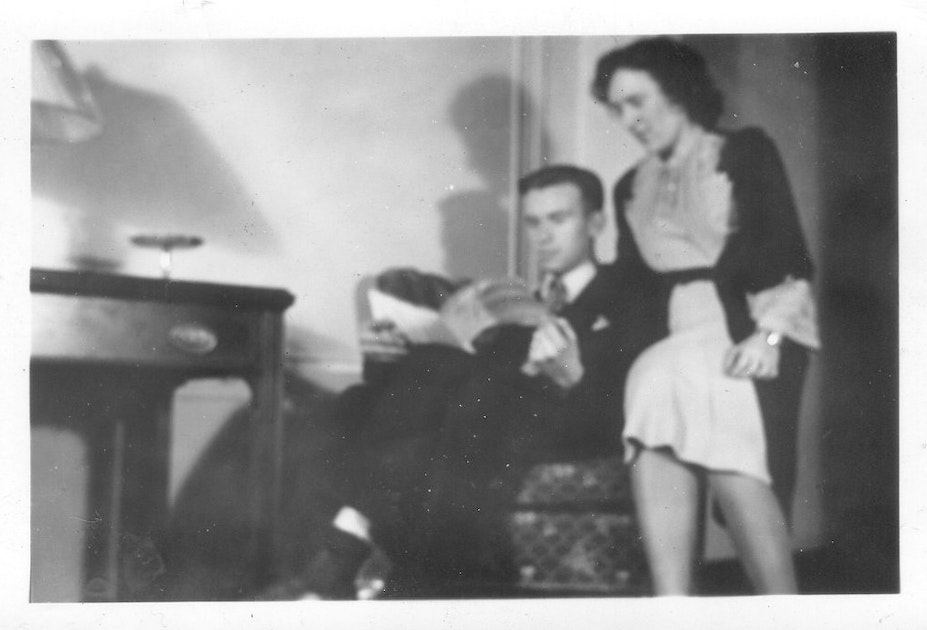 The picture above is of my parents in their Astoria apartment shortly after they were married. I can’t tell if the photographer was attempting an artistic, perhaps noir, look, or if it was out of focus. Perhaps the latter.

It was a completely different era for various reasons. My dad (almost 25), on this September evening, is home from work, still wearing a jacket and tie (and pocket square) instead of slipping into his casual tuts. (Not exactly a clothes horse, my dad, but you’d think he’d notice that his socks weren’t up to his knees.) I couldn’t make out what magazine he was reading, but continued with interest. On current events, my money’s on Time, a very conservative title in those days, which suited his politics. It certainly isn’t New Yorker Or a gossipy topic. The table is second-hand, maybe the lamp, and I’m sure their Queens apartment is modest, if not Ralph and Alice-like. honey languages. The chocolate dish on the table is notable because it survived the decades and is located at 123 LaRue Dr. in Huntington, New York. It was a part of our home. I still remember the mint that none of us touched.

My mother (24), not yet the first of five children, probably home from work in NYC, is, I think, a stylish figure, with her outfit—dig those racy shirts! That shiny watch on his wrist in the 1962 photo featured a few weeks ago [https://www.splicetoday.com/pop-culture/take-a-guess-what-year-is-it-210]. On the other hand, maybe it was Friday night and they were still interested, planning to dance with my Uncle Joe and Aunt Winnie or take in a movie at the nearby, and undoubtedly grand, movie palace. My father supplemented his income during college by playing saxophone with local bands in New Hampshire, but it was unlikely that they would be at the Cotton Club after hours. I don’t know, and it’s good to let the imagination wander about this moment captured in America, when many homes don’t have televisions, cars are big and weird, but very beautiful, and citizens talk unnecessarily about politics. Or NYC newspapers published multiple editions each day.

Find out what year it was by looking at these clues: The Parker 51 fountain pen was first sold; National Gallery opens; Great Gildersleeve debut on NBC radio; The Yankees (yawn!) defeated the Brooklyn Dodgers for the franchise’s ninth World Series championship; Faye Dunaway is born and Jelly Roll Morton dies; The Devil and Miss Jones published; Starring Rosalind Russell A touch of femininity; And Gourmet The magazine starts publishing.