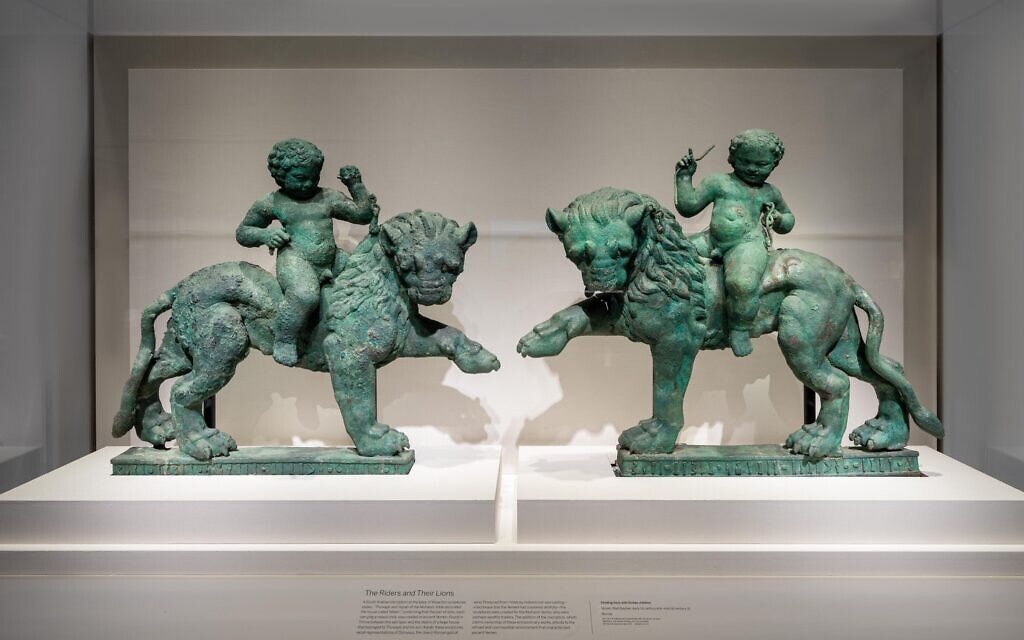 Ancient Greece and Rome are well represented in museums around the world, but the contemporary civilizations of Yemen – including the mysterious Jewish community – have received far less recognition. A new exhibition at the Smithsonian Institution in Washington, DC aims to correct this historical prejudice.

The first century BC to the second century AD was a golden age for Yemen, thanks to the incense cultivated in this historic region of the Arabian Peninsula. Along land and sea trade routes, luxurious fragrances reached the far reaches of the known world – including Rome in the west and India in the east. In Yemen itself, wealth from trade sparked a booming economy and stunning art.

“Ancient Yemen: Incense, Art and Trade” opened this fall at the Smithsonian and will be on display for at least the next three years. Located at the National Museum of Asian Art, the exhibition features works such as tomb statues in alabaster, architectural elements and bronze. Many objects reflect the exchange between East and West.

Curator Antonietta Catanzariti told The Times of Israel that “people see the objects and often think they are products of the Western world. Rome comes to mind. The Greeks come to mind. We try to present visitors with the diverse material culture of ancient Yemen itself.”

Yemen’s glorious past stands in stark contrast to its current state of devastating civil war.

“When I think about the exhibition, I am also driven by the fact that there is a lot going on right now,” said Catanzariti, “Yemen’s cultural heritage is being destroyed and looted. With this exhibition, the museum wants to share the collection with visitors and learn about ancient Yemen.” 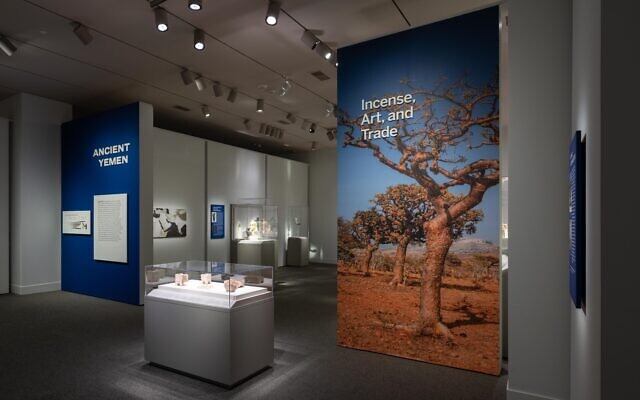 A set of two decorative bronzes suggests the cosmopolitanism of ancient culture. Each depicts a boy riding a lion. Although the boy resembles the Greek god Dionysus, the lion is written in South Arabic script.

Catanzariti noted, “The bronze sculptures of a boy riding lions are largely a product of the ancient kingdoms of Yemen.”

The same applies to the gutter with the image of the bull god Almaqah, which was placed on top of the building. Part of the pantheon worshiped by the polytheistic cultures of the time, Almaqah was a deity of both the moon and agriculture. 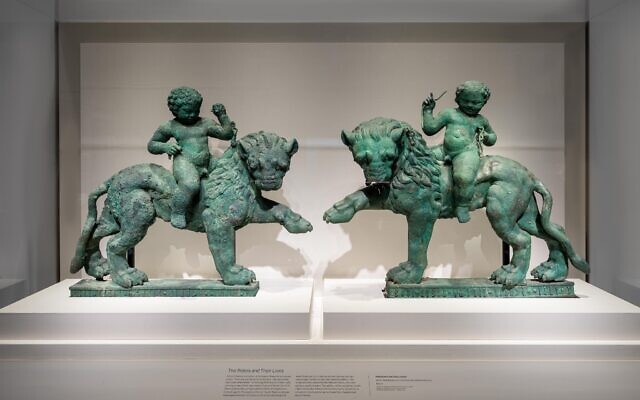 As Catanzariti, involved in the gutter, said, “Almaqah has not only a symbolic function, but also a practical one. As the water flows down the gutter, it falls to the ground and irrigates it, as this is the job of the gutter and Almaqah, who was believed to be not only the god of the moon, but also responsible [for] irrigation and agriculture.”

There is even an Indian figurine of a dancing goddess, attesting to trade links between Yemen and South Asia as sailors learned to navigate the monsoons.

After the trail of incense 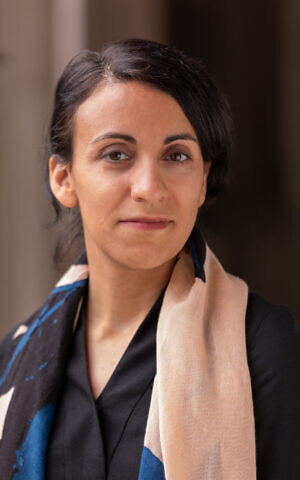 Educated in Italy and the United States, Catanzariti received his doctorate in art and archeology of the ancient Near East from the University of California, Berkeley. She has led excavations in Europe, the Middle East and Central Asia, including an ongoing project she is leading in the Qara Dagh region of Iraqi Kurdistan. Her previous curated exhibitions at the Smithsonian include “Divine Felines: Cats of Ancient Egypt” in 2017.

She said of the exhibition in Yemen: “Pliny the Elder writes about trade and describes how incense was very important in trade and how it worked, but we should not just rely on this classical source. There are archeological remains and artifacts that tell us about this complex trade help [explain] why incense was important.’

At the time, one type of incense was in particular demand – frankincense – and Yemen was ideally placed to provide it. Mentioned in the Christian Bible as one of the gifts of the Magi along with myrrh, frankincense comes from the Boswellia sacra tree, which is native to only four places in the world: Yemen, Oman, Somalia and Ethiopia. 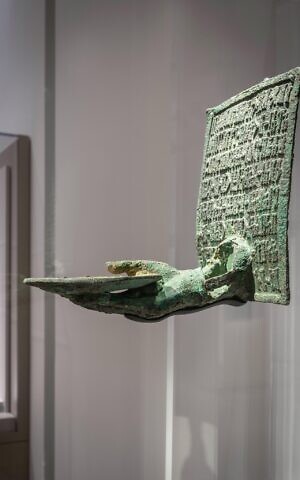 Plaque with dedicatory inscription and addition of an outstretched hand holding a phial/lamp, first half of the 1st century BC. n. no., Yemen, Wadi Bayhan, bronze. (Courtesy Smithsonian/Colleen Dugan)

“It needs a special environment that allows it to grow,” Catanzariti said, describing the incense from these regions as “of the highest quality” used “for secular or religious ceremonies in temples, for medicinal purposes and as a perfume.”

Ancient smokehouses are part of the exhibition, and visitors can even see some real incense burners.

“We’re trying to help visitors learn about incense by adding modern incense to the exhibit so the public can see what it looks like,” Catanzariti said.

Asked about its scent, she said: “When I lead gallery tours, I get a lot of questions about it. The one we have is unfortunately… maybe a few years old. It doesn’t have much of a smell. The visitor told me that her family uses it regularly and that it smells very nice. You need to place the incense on the coals and burn slowly. I personally haven’t tried it yet.”

The Lost Jews of Himyar

In ancient times, Catanzariti said, “there was a lot of demand for incense—for example, from the Western world.” As a result, she said, “Tree cultivation has increased. As demand grew, so did its value.” 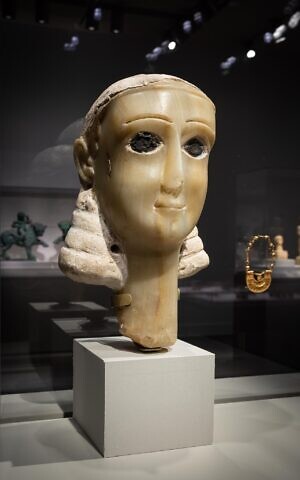 Head of a woman (known as ‘Miriam’), fragment, 1st century BC. n. no. – middle of the 1st century AD No., Yemen, Wadi Bayhan, alabaster, stucco and bitumen. (Courtesy Smithsonian/Colleen Dugan)

This benefited five separate kingdoms – Saba’, Qataban, Ma’in, Hadhramaut and Himyar – that ruled at least part of present-day Yemen during the period covered by the exhibition. They were collectively called the “Caravan Kingdoms” because of their importance in the incense trade.

Himjar was the last such kingdom, ruling in the sixth century AD. His end was tied to a controversial historical narrative. This Arab kingdom was founded in the fourth century AD. no. converted to Judaism, and then persecuted the Himjarite Christian population. In the sixth century, this persecution provoked a response from Ethiopia, leading to the fall of the kingdom, according to a 2011 paper by the Institute for Advanced Study at Princeton University. Later centuries would see the rise of Islam in the region.

The exhibition focuses on the much older caravan kingdom of Qataban, which existed from the eighth century BC to the second century AD. Most of the artifacts come from the Kataban fortress of Timna, the center of the incense trade.

“The [Qataban] the kingdom was located in the Bayhan Valley, along strategic trade routes,” Catanzariti said. “All the caravan kingdoms played an important role in the trade that went into the interior of the Arabian Peninsula to the north.” 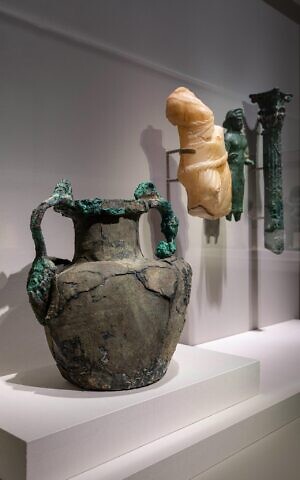 In the foreground, an amphora with handles originating from Silenian shoulder masks and ending in lion heads on the rim, 2nd century BC. n. no. – 1st chair. n. No., Greece or Rome, bronze. (Courtesy Smithsonian/Colleen Dugan)

“Yemen is located in a strategic geographical location,” she noted. “All the way through the ancient [Yemenite] kingdoms used this very strategic location to connect countries and other regions.”

The historic Jordanian cities of Petra and Aqaba played an important role in the trade. From Aqaba, the incense crossed the Negev desert on its way to the Levant coast, namely the port of Gaza.

Catanzariti called the Negev “a central and very important region along the trade route,” with “several stations” of caravanserai that provided rest for merchants and their camels.

“As archaeological research continues along the incense route, we are understanding the international impact of incense, revealing a connected world that is more complex than we thought,” she said, “shedding light on the trade that connected people from distant regions as reflected from various locations in the Negev.”

“I wouldn’t be surprised by the fact that the more we continue to excavate, the more details there are [there will be] traded goods.”