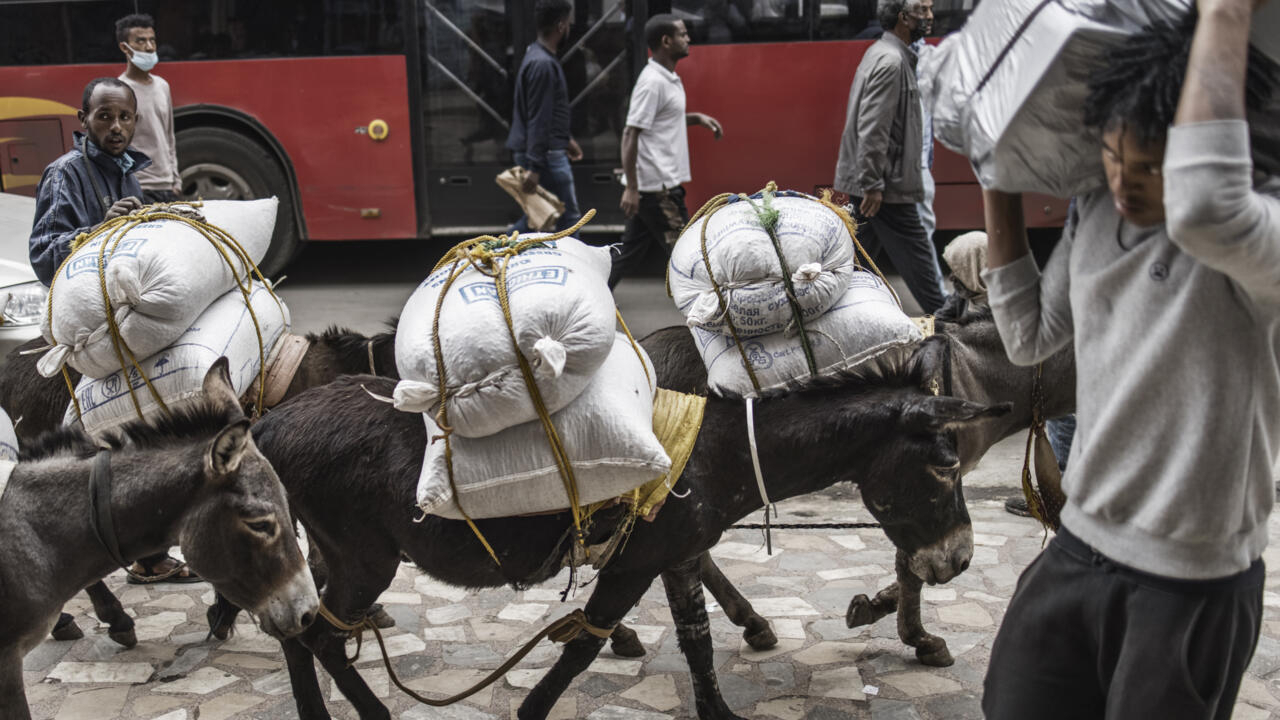 Addis Ababa (AFP) – “Everything is going up except our wages,” Ethiopian porter Jerihun told AFP, summing up the financial crisis that has left the Horn of Africa country reeling from hyperinflation and economic recession.

After a decade of dynamic growth in the 2010s, Africa’s second most populous country has been hit by a number of shocks, including the Covid-19 pandemic, an unprecedented drought, two years of war in its northern region of Tigray, and the impact of an invasion by world powers. Ukraine.

“Groceries, food, rent, everything has gone up in price,” said Jerihun, a 30-year-old father of two who works at the sprawling Mercado market in the capital, Addis Ababa.

“Because of the cost of living, life is very difficult… life has become expensive,” said his colleague Sindaye Tatelle, who has two sons, aged 12 and six, and “no savings”.

Porter, 29, told AFP his family would struggle to survive without handouts from the Addis Ababa municipal government, including uniforms, books and school meals.

On average, a good day brings in more than five dollars in wages.

“The economy is slow, so there’s less work and my pay is less,” Jerihun said.

Filled with thousands of stalls stocking everything from clothes to industrial machinery, the mercado’s busy lanes are lined with buyers, sellers, touts and day laborers.

But regulars say business has taken a tough hit this year as inflation dampens consumers’ appetite for spending.

Hamad Reddy, manager of a store selling televisions and washing machines, said, “Business is very cold not only here but in all sectors.

A few doors down, shopkeeper Sisai Desalekn complained of a nationwide foreign currency shortage, making it difficult for him to import the audio equipment and solar panels sold in his shop.

“Because of the shortage, we are not getting enough foreign exchange from the bank to import goods,” he told AFP.

“We estimate that our business has lost 40 percent in two years,” Desalegn said, adding that the downturn forced him to sell everything at purchase price, making it impossible to turn a profit.

This has reduced the daily expenses.

“It’s very difficult to do what you have,” he said, underscoring that the war in Tigray meant his former customers — traders and farmers from the north — were no longer coming to the market.

A slowdown in trade with the north has seen fewer trucks return to Mercado, meaning less work for porters like Zerihun and Sintayeh.

The conflict has put pressure on government finances and affected key sectors such as agriculture and industry.

This scared away investors and foreign partners, contributing to a shortage of foreign currency in the importing country.

A peace deal signed last month between the federal government and Tigrayan rebels has given hope for an economic recovery.

“I believe that the peace agreement will improve the situation in the future,” Zerihun said.

But Ethiopia’s economy hit roadblocks before the war began in November 2020, when the Covid-19 pandemic triggered a severe recession.

Growth, which averaged 9.7 percent between 2010 and 2018, will slow to 6.1 percent in 2020 and fall below four percent this year, the International Monetary Fund predicts.

A drought ravaging the Horn of Africa has weighed on agriculture — a key employer in the largely rural nation — and contributed to an explosion in food prices, while the conflict in Ukraine has also hit the cost of living.

The reasons behind the crisis may be manifold and complex, but its impact is easy to see, according to Zerihun.

“At the end of the day, all of this affects low-income people like us,” he said.