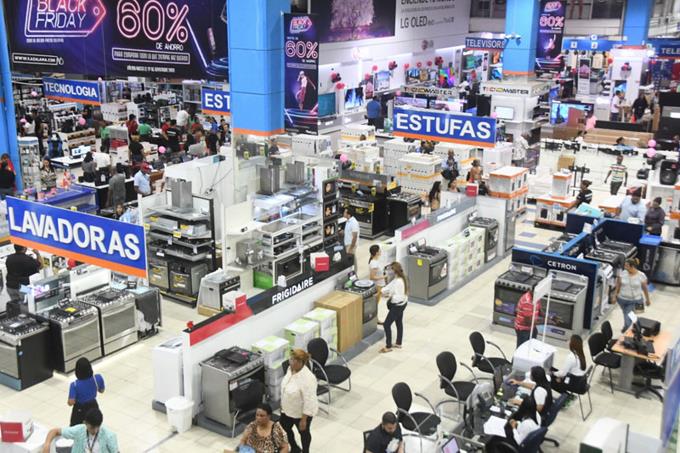 Santo Domingo
Black Friday was strongly felt among Santo Domingo businesses. The massive offers it brought naturally piqued the interest of the masses, who thronged to purchase the items of interest since morning.

Plaza Lama, La Sirena, Tiendas Corribio, La Gran Via and other shopping centers, although not as crowded as in previous years, it is clear that different percentages of discounts have been accepted.

“I came to look for a TV, and the truth is, there are good deals on brands,” Dariala said while walking through Plaza Lama on Winston Churchill Avenue.

Although the different store areas don’t feel crowded, the aisles of clothing, homewares, haberdashery and appliances draw a lot of attention, especially appliances.

“Washing machines, refrigerators and televisions. That’s what people come for. We have so many offers and people are going crazy; They have taken a lot of washing machines,” an employee of Tiendas Corripio told Listín Diario, where offers have been prepared since the beginning of the month and exploded since Thursday.

Home appliances have been crowned the “undisputed kings of Black Friday” by various sales managers in stores.

On Duarte Avenue, the flow was intense; People with televisions on their shoulders, crowded shops and bulky shopping carts were the main scene.

“The offers aren’t even that good, but if you don’t buy today, when are you going to?” A woman said as she left Plaza Lama; However, his cart was too full and he told reporters that he had taken everything.

Some were satisfied, others not so much, as buyers voiced their opinion about the offerings.

People who left their homes to make specific purchases searched stores for discounts that best suited them; Others wandered the aisles to find something good, comfortable and cheap enough to make their first purchase.

This is the case of Maria Jiménez, who reporters found in Plaza Lama, La Sirena and Tiendas Corripio.

Black Friday has been established as a date when stores worldwide offer special price offers for end-of-year shoppers to make big purchases, leading to new Christmas and New Year assortments.

Over the years, businesses in the Dominican Republic have adopted this American celebration to offer their products at exceptional prices.

The annual celebration in the country has created great deals in most of the shopping malls.

On this occasion, although the crowd was not as large and congested as in previous years, the approval of the various offerings was evident in dozens of people.