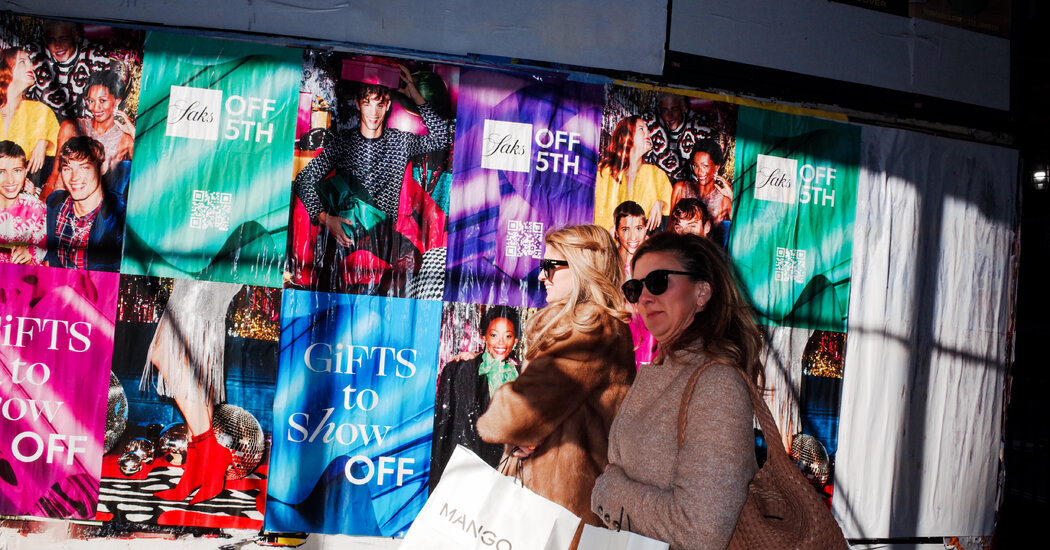 Inflation fell more sharply than expected in November, an encouraging sign for Federal Reserve officials as they gather in Washington this week to discuss the next steps in the policy campaign against rapid inflation.

Central bank policymakers are set to release their latest rate decision at 2pm on Wednesday at the end of their two-day meeting. They are widely expected to raise interest rates by half a percentage point, slowing after rapid three-quarter point moves. They will also release new economic forecasts.

Tuesday’s inflation figures could feed into their debate about the future policy path. The Consumer Price Index rose 7.1 percent in November from a year earlier, less than the 7.3 percent economists had expected and a slowdown from the previous reading of 7.7 percent. Between October and November, prices rose more slowly than forecast.

After removing food and fuel prices, which move a lot, the index rose 6 percent. That was lower than the Bloomberg forecast of 6.1 percent.

Overall inflation has been easing on a year-on-year basis since peaking in June, a sign that price increases are turning a corner after months of unexpected strength.

Many economists had expected inflation to ease toward a more modest 2 percent pace this year. Instead, rent increases have been stubbornly fast, fueled by disruptions from the war in Ukraine, supply chain problems and the climbing costs of services such as airfares and car insurance. Analysts and policymakers expect inflation to cool more significantly in 2023.

Central bank policy should help make that happen. Central bankers have raised interest rates this year at the fastest pace in decades, from near zero at the start of the year to an expected range of 4.25 to 4.5 percent this week. High borrowing costs dampen the economy, slow the housing market and make it more expensive to expand a business or buy a car on credit. That would eventually lead to lower demand, more stagnant hiring and a general economic slowdown.

Weak demand, combined with healing supply chains and a cooling rental housing market, could push prices down, many economists predict. Economists polled by Bloomberg expect CPI inflation to slow to 3.1 percent in the final quarter of 2023, about half the current pace.

Consumer price index figures released on Tuesday are closely watched as they are the first major inflation data to come out each month. But when the central bank officially sets its 2 percent inflation target, it targets the personal consumption expenditure index, a more delayed measure.

That measure runs below the Consumer Price Index rate, but is much higher, coming in at 5 percent in the year to October after stripping out volatile food and fuel.

For the central bank, the key question going forward is not just whether inflation will fall, but how quickly and how completely it will fall. Central bankers worry that if price increases are fast enough over a long period of time, consumers can expect them to continue. They can demand higher pay raises, and if they win those raises, their employers can institute regular and rapid price increases to offset mounting labor bills.

In short, expectations of faster inflation will help make it a reality.

Although most measures of inflation expectations have been fairly stable so far, policymakers do not want to assume they will stay that way.

The new inflation data may give policymakers some signs of encouragement, but also some cause for continued concern. Food inflation moderated and energy costs eased, which helped moderate inflation.

But food and energy costs are not the type of inflation the central bank watches closely because they are volatile and generally do not closely reflect underlying strength in the economy.

There were other encouraging signs that prices of some commodity categories had started to fall. For example, used cars and trucks are down 3.3 percent from a year earlier, and televisions are quickly becoming cheaper. Such changes indicate that supply-chain healing ultimately benefits consumers.

However, under the surface, services inflation remains strong. Part of that comes from the rapid increase in rents, which is expected to fade at some point in 2023. But some are ticked up in other categories, such as trash collection, dentist visits and tickets to sports games.

Service price increases are tied to rising wages and can be difficult to stamp out. Excluding energy, service costs now account for about 3.9 percentage points of overall inflation, and can keep pace with price increases even as other types of inflation fade.

In the 1970s, officials allowed inflation to run slightly faster than usual for several years, creating what economists called “psychology of inflation.” While oil prices rose for geopolitical reasons, the already inflated inflation base and high inflation expectations helped prices climb into the bullish stratosphere. Central bank policymakers eventually raised rates to nearly 20 percent, pushing unemployment back into double digits to bring prices back under control.

Central bankers today want to avoid reliving that painful experience, which is why they are trying to bring about price hikes immediately. For now, they expect to raise interest rates slightly in early 2023, then leave them at high levels to try to rein in the economy and squeeze inflation.

“Restoring price stability will likely require keeping policy at a restrained level for some time,” Fed President Jerome H. Powell said during a speech late last month. “We’ll stay in the study until the job is done.”