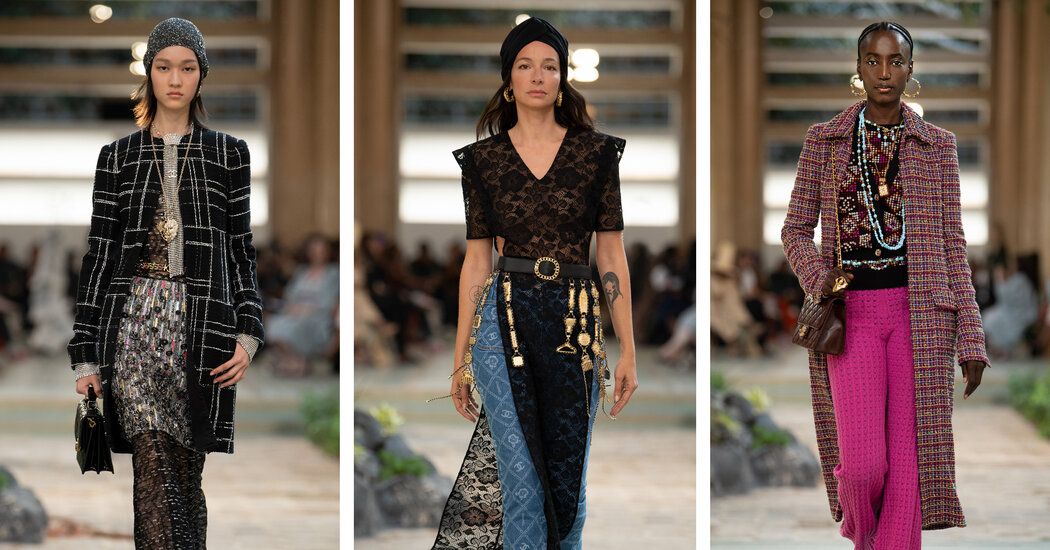 It could have gone wrong. The optics of Chanel, one of the top European high-luxury brands, parachuting into Africa, a continent where they have no stores or significant businesses, with a punctual fashion show of bells and whistles, could have hit, hard, colonialism .

Especially since it was the first show of its kind in sub-Saharan Africa, not to mention in Dakar, Senegal, once part of the French empire, now a country with a thriving fashion culture and heritage, especially since Chanel has no particular individual history. with the area (“I can’t say that Madame Chanel dreamed of coming to Dakar,” said Bruno Pavlovsky, Chanel’s fashion president).

Especially in the wake of fashion’s mea culpas when it comes to diversity and inclusion, and the recognition of its own multiple missteps with cultural appropriation.

The Chanel Métiers d’Art show, held at the Palace of Justice in Dakar earlier this week, came out with just a touch of backlash on Twitter is a sign of the effort made by the house to reformulate the exercise.

Rather than simply a fashion show designed to attract a new market to spend big, it was conceived as a three-day festival following Dakar Fashion Week, designed to showcase the country’s talents in art, dance and music and literature. Less like an exotic shortcut to new inspiration, in other words, than a celebration of equals.

In this, he marked a great, if imperfect, step forward.

However, by focusing on a variety of collaborators around the show, including Senegalese rapper Nix, singer Obree Daman and local dance school Ecole des Sables, and placing the connections between them and Chanel somewhere on the abstract plane of the mind , also made the outfit itself look like the underdog.

Still: the clothes. They were inspired, according to the show notes, by the “pop-soul-funk-disco-punk decade” of the 1970s, as opposed to anything as obvious as a traditional Senegalese motif, material or craft technique (the collection’s elaborate craftsmanship, which was conceived to show the work of numerous specialized workshops that Chanel bought to preserve its know-how, it was all made in France). Which meant, it turned out, mostly…pants. Knitted, bouclé, flared, denim, often combined with highly worked blouses, tunics or jackets.

Designer Virginie Viard can make a beautiful classic Chanel gown, and she did here, with some lace crochet looks, garden party cocktail dresses and sequined mermaid evening numbers, but they were loaded with offerings that felt more fitting for a raiding tribe. -the hippie bourgeoisie.

If there was any imaginative line of passage between the place and the products, it was in the breadth of colors and the layering of the pieces: a beaded waistcoat over a bouclé jacket; a neat wraparound skirt over skinny knit flares; a long, flowing robe over faded jeans, caught in a golden belt. Of the 62 models in the sample, 19 were African and 12 of them were Senegalese; the hair and makeup crews were about half local and half foreign, Pavlovsky said.

However, above all, the clothes seemed to be the excuse to bring 850 people, about 500 of them from all over Africa, to Dakar. Including celebrities like Pharrell Williams, Whitney Peak and Nile Rogers (although not this critic; I came from afar, like most consumers), to better promote the city’s reputation as a cultural center and Chanel as a kind of creative, well. .. What? Kingmaker or Global Power Distributor?

The line between those two positions isn’t entirely clear (maybe it depends on where you’re sitting), which is where the discomfort lies.

Chanel, which was joined by both President Macky Sall and the Ministry of Culture for the event, intends to continue working with local talent, and will return to Dakar in January for a 19M program (19M is the official name of the headquarters). of the specialized workshops) which will focus on works created in conjunction with embroiderers and local artisans. That will form the basis of a subsequent exhibition that the brand will organize in Paris. And, said Mr. Pavlovsky, his Dakar experience may well be the model for a different kind of cultural exchange/collection experience in the future.

“It’s hard to be creative if you’re stuck on rue Cambon in Paris,” he said.

Would Chanel ever buy a special Senegalese weaving workshop in the same way that it bought European workshops like Lesage and the couturier Maison Michel, to better preserve its know-how? Mr. Pavlovsky said there were no such plans, but he could envision a future, perhaps, where that would be possible.

For now, said Oumy Diaw, a curator who was at the show, and despite some difficulties such as scheduling the show on the same day as the anniversary of the foundation of the Museum of Black Civilizations in Dakar, the mark is being extended with the benefit of the doubt. Fortunately, said Ms. Diaw, “This passage of Chanel will not be a one-hit wonder or an opportunistic project to feed Western fashion houses with the enormous aesthetic capital of Africa,” but the beginning of such a vibrant process of honor. that aesthetic capital is.

After all, at the Chanel shows in Paris, the crowd usually arrives dutifully decked out head to toe in her most glamorous bouclés, camellias and strings of pearls. In Dakar, by contrast, the crowd made dazzling style statements.