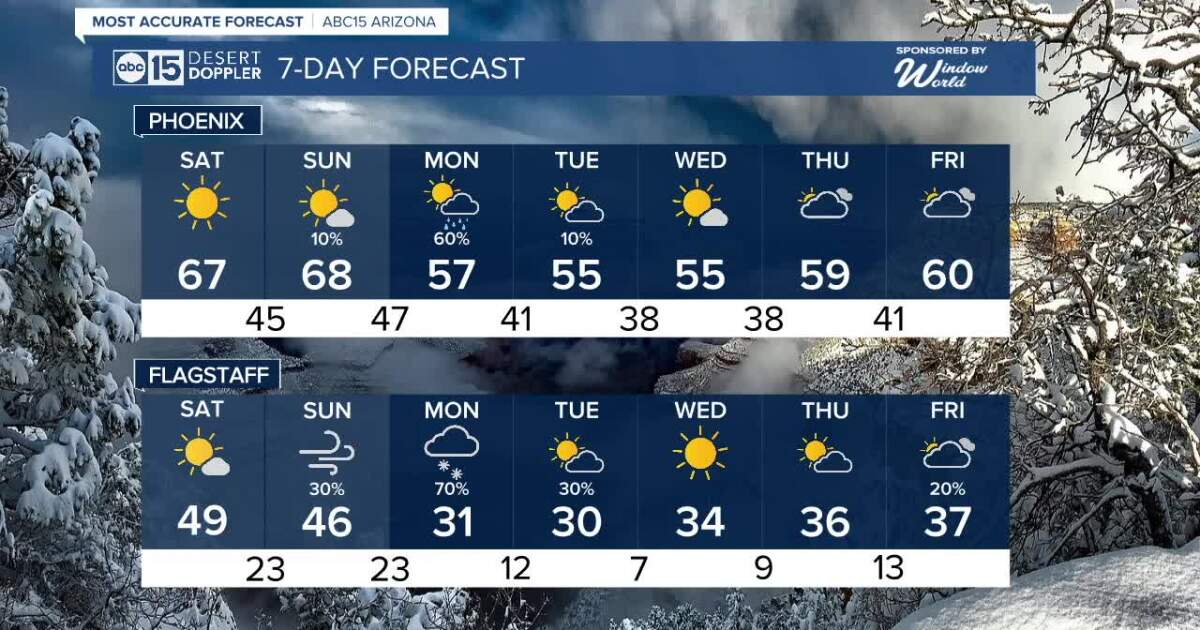 PHOENIX – Lots of sun for your Sunday with temperatures in the upper 60s. Enjoy the good weather because…

So, we’re tracking our next big storm.

Winds will begin to pick up on Sunday and gusty conditions will continue through Monday as well. Peak gusts could reach 40 mph in northern Arizona and 25 mph here in the Valley.

Rain and snow will begin to move Sunday night and increase in intensity Monday morning.

Monday will be a ABC15 Meteorological Action Day. Take action now to prepare for significant impacts across our state. That may include changing your travel plans on Monday to avoid the highlands as the roads turn slippery and icy.

Early estimates show the snow level could drop to 4,000 feet with five to nine inches of snow expected for areas above 6,000 feet, like Flagstaff.

Winter Storm Warnings and Advisories They are in effect for areas above 5,000 feet Sunday afternoon through Monday night throughout the Arizona High Territory and the higher elevations of southeastern Arizona.

Here in the Valley, some places could get up to a half inch of rain on Monday.

The high country of Arizona will see snow levels drop to 4500 feet by Monday, but only snow cover at that level. Most places above 5,000 feet could see between 5 and 9 inches of snow.

One thing is for sure, it’s going to be cold!

Valley highs will fall into the 50s starting Monday with overnight lows in the 30s.

In the north, our highest elevations will see overnight temperatures plummet into single digits.

With all that cold air, we have a good chance of seeing our first frost of the season Tuesday and Wednesday mornings in central and southern Arizona. This will include the greater Phoenix area.

Temperatures will slowly start to recover late next week.