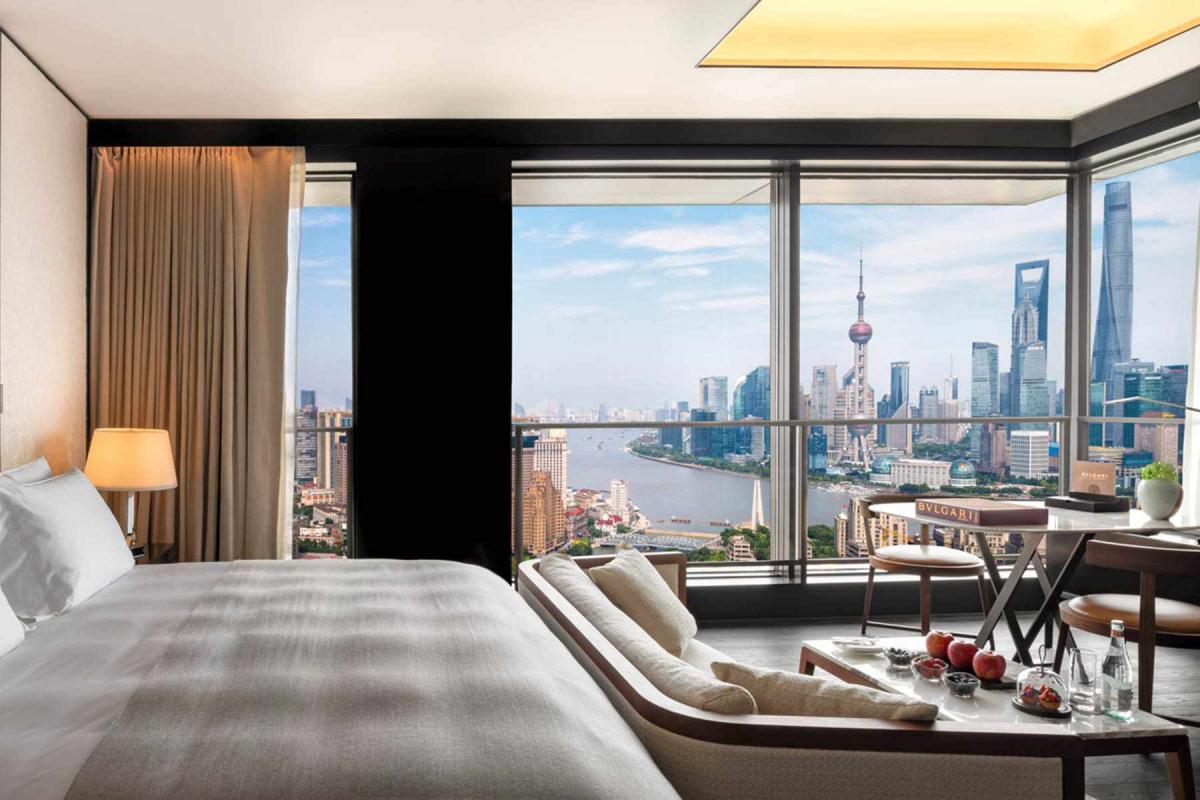 With hotels in Paris, London, Milan, Bali, Dubai, Shanghai, Beijing and more on the way, Bulgari Hotels & Resorts is rapidly expanding its portfolio.

In 1884, a few years after Sotirios Voulgaris (Italianized as Sotirio Bulgari) moved to Rome, the talented Greek silversmith opened a shop on Via Sistini and established Bulgari. Despite its humble beginnings, the brand quickly gained recognition in the 1920s when Voulgaris began to hone in on high-end jewelry. In the 1940s, the Bulgari signature identity began to emerge, focusing on yellow gold pieces. The house’s now iconic serpentine aesthetic made its first appearance and was further established in the mid-1950s when the company introduced atypical gemstone color combinations. Bulgari gained an international and Hollywood following in the following decade, loved by the likes of Sophia Loren, Gina Lollobrigida, Princess Salimah Aga Khan and Elizabeth Taylor.

Today, Bulgari is recognized as one of the best jewelry brands in the world. Over the years, the company has made some expected expansions into high-end watches, bags, accessories and fragrances, but in the early years, the maison made an unprecedented move: venturing into the hotel industry. The goal? “Offering the hospitality of a jeweller, highly personalized and warm, yet distinguished and sophisticated, and taking it to the next level,” says Silvio Ursini, Executive Vice President of Bulgari Hotels & Resorts.

As a jewelry company, Bulgari had the humility to recognize the need to bring in an expert familiar with the business to properly run luxury hotels. So they turned to Ritz-Carlton, now part of Marriott International’s luxury division, to be their operating partner.

In 2004, the company made its long-awaited debut with the Bulgari Hotel Milano. Some may agree that it was the perfect first destination – it’s in Italy and the country’s fashion capital, no less – but others may wonder why not Rome, where Voulgaris launched Bulgari? The answer is simple: location.

“For all the projects we develop, we don’t want to create ‘another’ luxury hotel, but a unique hotel in a unique location,” says Ursini. “And this is the reason why we invest so much time to find the one place. that can really guarantee an extraordinary experience. We don’t care how long the whole process is going to take.”

And this can be seen with all Bulgari properties. For example, in Milan, the hotel is in the heart of the city, but located on a private road that allows privacy and tranquility; in London, it is located in a quieter section of Knightsbridge, right next to Harvey Nichols and Harrods; in Shanghai, it is located in a protected heritage area in the Jing’an district with the vibrant urban landscape of the metropolis on one side and the tranquil Huangpu River on the other; and in Paris, the group’s hotel, which just opened in late 2021, is on Avenue George V in the famous Triangle d’Or, a short walk from the Champs Elysees and Avenue Montaigne. In 2023, the brand will finally make its return to Rome in the Campo Marzio neighborhood, a few minutes from the Spanish Steps and the Bulgari flagship store on Via Condotti.

But what else can you expect from a Bulgari hotel stay? There is a certain degree of uniformity when it comes to aesthetics. All designed by Milan-based architecture firm Antonio Citterio Patricia Viel, each property is contemporary and showcases Italian craftsmanship, right down to the custom marble finishes. Each hotel features colorful accents that pay homage to the brand’s jewels and subtle touches of Bulgari iconography, such as an eight-pointed star sewn into the curtains or more open displays such as a glass panel depicting a snake in the Bulgari Hôtel Paris bathrooms. . Each also boasts a world-class spa, most of which feature a large indoor pool, with the exception of the Bulgari Resort Bali, where the oasis is open-air to immerse guests in the lush environment, and additional facilities such as steam rooms, saunas and relaxation rooms.

And it goes without saying that the service is exceptional: attentive and pleasant, but not overly so. “As a luxury brand, we know how to pamper and build a true relationship with our customers,” says Ursini. “Our first priority has been and remains guest satisfaction.” Ursini also describes the overall experience as “addictive”, which is not only his own opinion, but also confirmed by the high number of returning guests received at the various Bulgari properties. “We believe that on the market today there are either classic luxury hotels, which have a very traditional design and atmosphere, or trendy hotels with very innovative designs. [but] do not fall into the luxury sector. Bulgari hotels are distinguished by their strong energy and contemporary feel, while maintaining authentic elements of luxury in quality and features.

Bulgari Hotels & Resorts currently has seven properties in its rapidly expanding portfolio. In addition to Rome, a Tokyo hotel near the city’s main train station is also slated for next year. After these two exciting openings, the brand will finally debut in the United States, first with a Miami hotel in 2024, followed by openings in the Maldives and Los Angeles in 2025. With projects in such popular destinations underway, one can only assume they have the eyes on others, but only time and the right location will tell.

For more Travel & Leisure news, be sure to sign up for our newsletter!

Read the original article on Travel and Leisure.