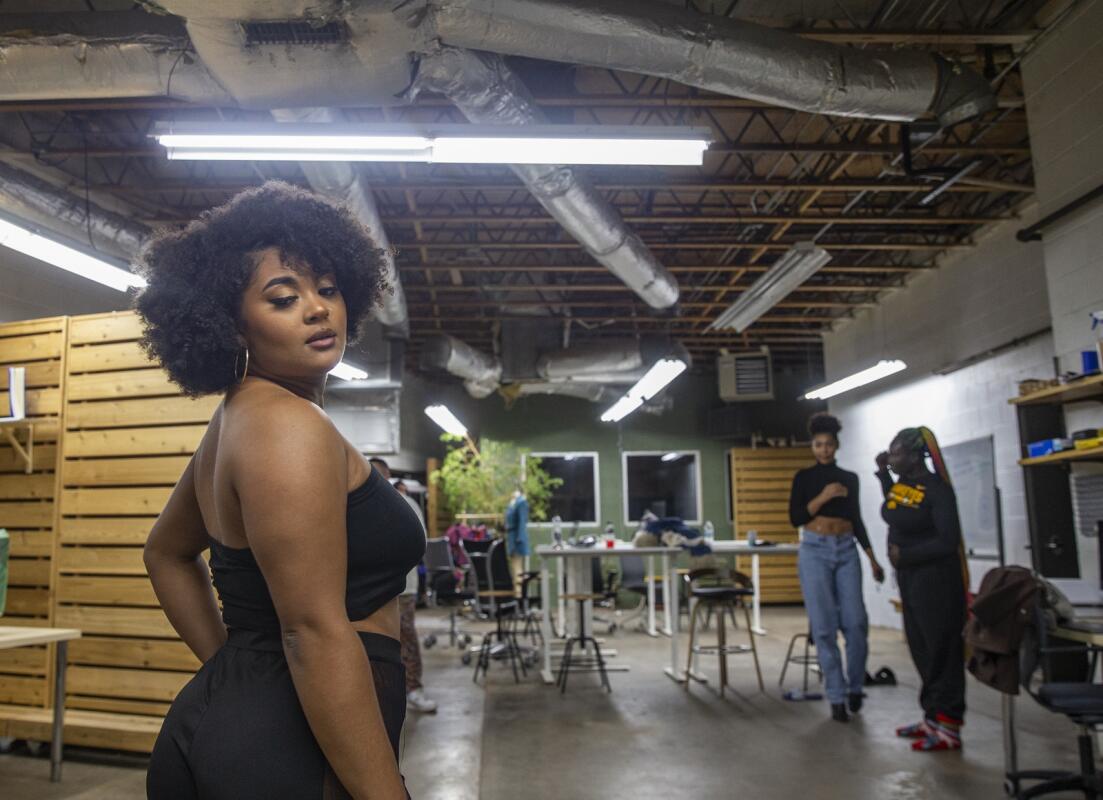 Machia Leggins of Cedar Rapids looks in the mirror as she practices her runway walk during a model boot camp class Dec. 2 at the Wright House of Fashion in Iowa City. (Savannah Blake/The Gazette)

Members of the Wright Fashion House pose in front of the mirror as they practice posing during modeling camp at the Wright House of Fashion in Iowa City on Dec. 2. (Savannah Blake/The Gazette)

Machia Leggins of Cedar Rapids (left) and model boot camp instructor Arianna Hawkins practice a walk together during a runway walk at the Wright House of Fashion in Iowa City on Dec. 2. The fashion house was once the home of Varsity Cleaners, but is being transformed by local fashion designer and black activist Andre Wright into a fashion house. (Savannah Blake/The Gazette)

Shermiah Doughtry of Cedar Rapids strikes a pose while practicing during modeling camp at the Wright House of Fashion in Iowa City, Iowa on December 2. The two-day camp allowed local models to learn how to look comfortable on stage and in front of cameras. (Savannah Blake/The Gazette)

That’s what a local black fashion leader and activist in Iowa City is doing for youth and young adults at the former home of Varsity Cleaners, 910 S. Gilbert St. Through a new nonprofit sprouting up there, industry leaders will teach them the ins and outs. fashion, textiles and creative industries where faces like yours are underrepresented.

In short, the Wright House of Fashion is giving new meaning to “taking them clean.”

After sitting vacant for nine months, the former Varsity Cleaners that closed in January after 106 years in Iowa City is getting a new lease of life with a different kind of “varsity” outfit.

“We took a building that was toxic as a dry cleaner and transformed it into a sustainable space for people who want to make sustainable fashion,” said Andre Wright, founder of the new nonprofit and co-founder of other movements like Humanize My Hoodie. and the Black Liberation Space. “What we’re doing is breaking ground and pioneering a whole new industry here.”

Acquired in partnership with a significant investment from Resilient Sustainable Future for Iowa City, a nonprofit organization committed to “re-locating the sources of our power and health with a diverse set of leaders,” the space will transform in three phases to serve a myriad of functions and programming. .

For more information about the non-profit Wright House of Fashion in Iowa City and ways to get involved or support it, visit wrightfashionhouse.com.

Those interested in modeling can respond to the first call for models on December 20. The fashion house’s first quarterly fashion show will be held on March 31.

With a pop-up retail incubator, podcast room, screen printing and fabrication area, media studio with video and photography equipment, multipurpose room with sewing stations and more, the fashion house is pioneering a new youth-focused model to give them an outlet to improve. creativity and confidence. With a focus on serving BIPOC, LGBTQ and other marginalized communities, young people can attend workshops and be mentored by volunteers in virtually any creative field, from screen printing and graphic design to fashion modeling, sewing and photography.

“This is probably Black Liberation (Space) 2.0, but with a more specific focus,” Wright said. “These are all very direct, driven things that I’ve used throughout my life to get to where I am now.”

Defying the term usually reserved for exclusive brands, this fashion house is a place for truly inclusive community and education. But in a rural state that isn’t exactly known for its fashion sense, the Wright House of Fashion is working to create something transformative. Its namesake calls it remarkable: a new ecosystem.

After years of running local fashion shows, working with models and designers, and mentoring youth, a sustainable system to support often-overlooked creative people is key to what’s happening in the space.

“We are in a very good position to make a revolutionary mark in our community and beyond,” Wright said. “We’re creating a whole new market … for others to get involved and express their bodies, their mindsets, the way they want to be seen in the world and have no regrets.”

For some local young people, often underrepresented in the creative industries and told to play sports, the peer group already using the space for the past five months has been a lifesaver. Overall, black designers across all disciplines only make up about 3 percent of the design industry.

Arriana Hawkins, director of talent attraction at the fashion house, said there were no local resources when she wanted to pursue modeling about five years ago. As a black woman, she got a lot of “no’s” when she tried to enter the field; the rejection, she says, is typical of black models, plus-size models and others who don’t fit the cookie-cutter mold of the fashion industry. standards

By instilling confidence, she hopes to help other models like her with the encouragement they need to boost their careers. This month, she began holding modeling workshops to teach participants how to strike a pose.

“Models like me couldn’t find the resources, which leaves a lot of people, especially BIPOC people, in situations where they have to do other things to occupy their time,” Hawkins, 20, said. “We encourage people to be confident. to fulfill their dreams and focus on what they know they are capable of doing in the creative community.”

Wright said the mentoring and workshops will provide many soft skills that will help the youth for the rest of their lives, whether they follow fashion or not. Practice and networking are other key skills you hope to instill in a supportive environment.

For institutionally disadvantaged youth of color, those skills are especially important.

“There are not enough ways to fight adversity, oppression and segregation,” he said. “This is a small portion of the potion that needs to be mixed for a real solution. This is my way of doing my part.”

Next year, the nonprofit hopes to reach a fundraising campaign goal of $1.5 million to build the organization and hire three black women who will serve as the backbone of continued growth. In time, Wright envisions the nonprofit fashion house as something that could be replicated for youth across the country.

The first two phases of building renovations, including the screen printing area, media studio and retail incubator, are scheduled to be completed in May 2023. The final phase of renovations should begin sometime in 2024.

“It’s not so much about how much money we can make as fashion people but (how we can) create an ecosystem that helps everyone who wants to participate,” Wright said. “We’re being superheroes and saying ‘Look, we can do it here.'”

Instructor Arianna Hawkins smiles as she watches Machia Leggins of Cedar Rapids (left) and Ethan Courter of Iowa City walk together during a model training course at the Wright House of Fashion in Iowa City on Dec. 2. During the course, the models practiced their poses. and trail rides. (Savannah Blake/The Gazette)

A group of models hug each other Dec. 2 after finishing the second day of modeling camp at the Wright House of Fashion in Iowa City. (Savannah Blake/The Gazette)

Andre Wright, co-founder of Humanize My Hoodie, discusses shirt designs with Myran Brewer during a graphic design class for fashion activists on June 23, 2021 at MERGE in Iowa City. The class was a precursor to the Wright House of Fashion which created merchandise in a partnership between Humanize My Hoodie and Warner Music. (Liz Martin/The Gazette)

The sewing space at the Wright House of Fashion in Iowa City. (Savannah Blake/The Gazette)

A meeting space in the back area will become an incubation space for designers to test their designs and products at Iowa City’s Wright House of Fashion. (Savannah Blake/The Gazette)

A meeting space in the back area will become an incubation space for designers to test their designs and products at Iowa City’s Wright House of Fashion. (Savannah Blake/The Gazette)

The work area used for classes and projects at the Wright House of Fashion in Iowa City. (Savannah Blake/The Gazette)

The former laundromat’s front window area will become an incubator space for local designers to test their wares before making it public at the Wright House of Fashion in Iowa City. The space, shown Dec. 2, is being transformed by local fashion designer and black activist Andre Wright. (Savannah Blake/The Gazette)