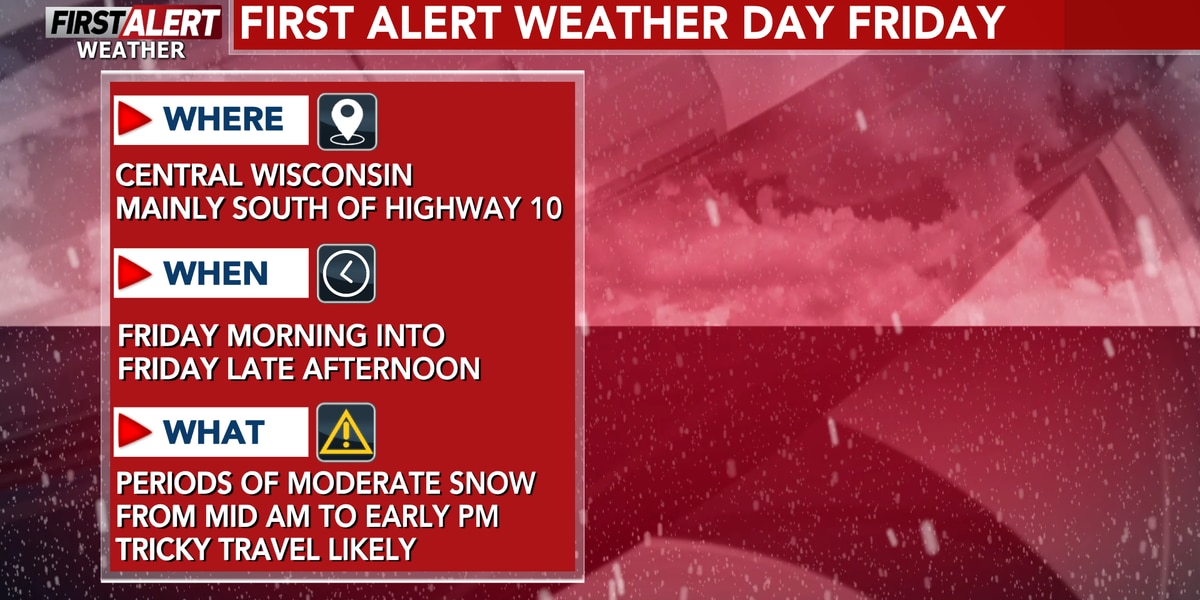 WAUSAU, Wis. (WSAW) – A First Day Weather Advisory has been issued for Friday from early to mid-morning to late afternoon for locations near and south of the 10 Freeway. Snow will move into the southern portions of central Wisconsin. Friday morning, falling moderate to maybe heavy at times mid-morning to early/mid-afternoon, tapering to snow showers by late Friday afternoon.

Low pressure will track eastward from the western Plains into northern Illinois Thursday night through Friday afternoon. A band of snow will track the low on the north side, with snow accumulation likely in southern Wisconsin, as well as the southern parts of our observing area (Wood, Portage, Juneau, Adams, and Waushara counties). ). The snow will arrive during the morning commute south of the 10 freeway and continue through the lunch hour into mid-afternoon.

Roads range from slippery and wet (if treated) near the 10 freeway to snow-covered and dangerous at times farther south. For locations north of the 10 Freeway to the 29 Freeway, light snow and snow showers are available Friday morning through afternoon with some slippery sections on the roads. Those in the Northwoods won’t have much more than clouds with the possibility of a gust on Friday.

Accumulations will range from none in the north to less than 1″ layer in Wausau, Marshfield and Shawano, to 1-2″ in Stevens Point, Wisconsin Rapids and Wautoma, while 3-5″ in the southern half of Juneau & Adams, including Necedah, Adams, and Wisconsin Dells. If you have a trip that will take you to southern Wisconsin on Friday, be prepared for harsh driving conditions due to snow. Be sure to allow extra time, slow down, and keep enough distance between yourself and other vehicles on the road to maintain safe stopping distance if necessary.

Once this winter storm moves east on Friday night, there will be an additional chance for snowfall in the region on Saturday. Accumulations of one layer up to 1″ are possible, creating slippery road conditions.