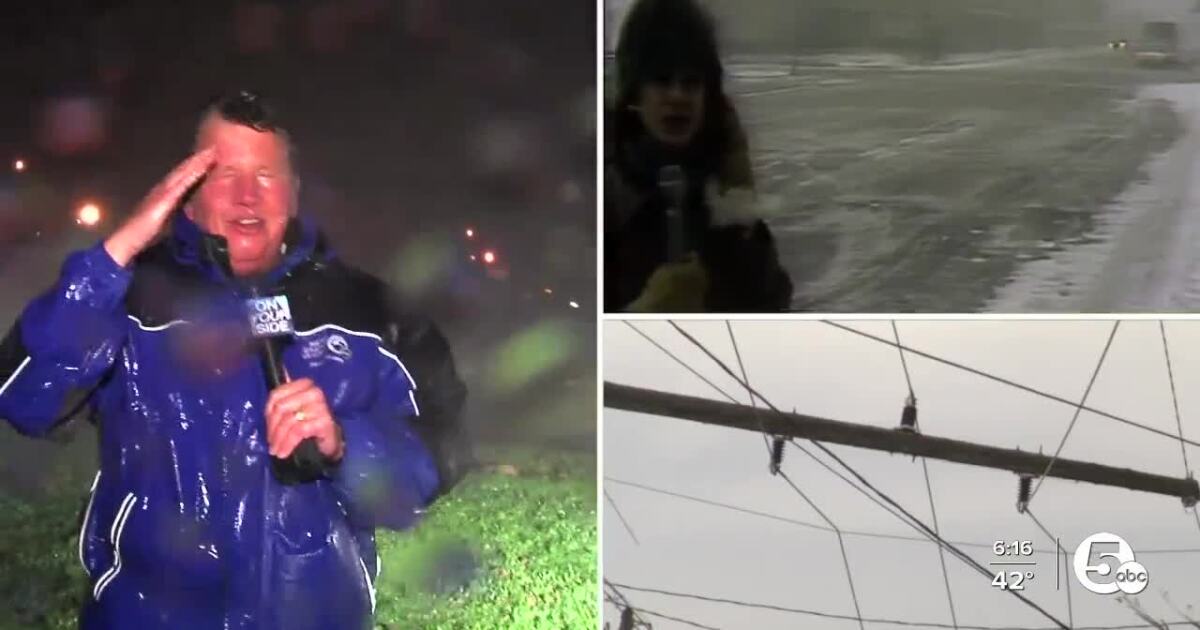 CLEVELAND — Since News 5 first went on the air in December 1947, we’ve had the community in mind, bringing you the stories you need to know. For decades, we’ve put community first with some of the best weather talent in Northeast Ohio television history here at News 5.

As part of our 75th anniversary celebration, we take a look at some of our notable weather personalities and events, and examine how forecasting technology has evolved over the years.

Just a month after WEWS first went on the air, we became the first Cleveland television station to bring our audience extended severe weather coverage, staying on the air for hours during a January blizzard. 1948.

Our first meteorologist, Tom Field, made sure everyone in Northeast Ohio had the information they needed to stay safe.

But when you think of blizzards, chances are the blizzard of ’78 comes to mind.

“The wind is so strong I can’t even catch my breath,” said a News 5 meteorologist reporting from Public Square at the time.

Even 44 years ago, people had the same thought when they saw that a blizzard was ready to hit: milk and bread.

“Today at the Milbrook Bakery, about 30,000 loaves of bread were sold at the shipping docks as fast as the bakery could produce them. Milbrook does not normally sell bread on Sundays,” a News 5 anchor reported in 1978.

While we’re no stranger to big snow events here in Northeast Ohio, our weather really runs the gamut.

Twenty years ago, we actually saw back-to-back years with fall tornado outbreaks, including massive home damage in Solon in 2002.

“And then all of a sudden it sounded like a bunch of marbles hitting the top of the roof,” said one resident.

A magnitude 4.96 earthquake struck Lake County in 1986 and its effects could be felt in 11 states, parts of Canada, and Washington DC.

“Suddenly the building started shaking and tiles started falling off the roof,” a witness told News 5.

While Tom Field was our station’s first meteorologist, Don Webster may be the best known, and he did much more than weather; Most notably, he hosted “Upbeat,” the News 5 music and variety show that attracted several big-name music artists.

This self-described “Child of Canada” even turned down an offer to host “American Bandstand” because he loved it so much here in Cleveland.

Technology has come a long way since the first snowstorm we covered in 1948.

Veteran viewers may remember the days when our meteorologists used magnets and slides to share their forecasts.

Of course, we didn’t always have radar. It appeared when Webster was our meteorologist and it looked like what you would expect to see on a submarine.

While we now have much more advanced tools to give you information like temperature, precipitation, and wind speed, we used to have all those gauges hanging on the wall at the weather center.

Now, Chief Meteorologist Mark Johnson and the First Alert Weather Team have banks of computers that pull in gigabytes of weather data that they use to generate a forecast for our viewers every day. Plus, the latest Doppler radar allows us to peek inside a thunderstorm and show exactly where danger lurks.

No matter what Mother Nature throws our way—and you know she throws everything at us here in Northeast Ohio—WEWS has been here when you need us for 75 years, and we look forward to keeping you safe and informed for the next 75.

RELATED: You can find more of our 75th anniversary coverage here

Want the latest Power of 5 weather team updates wherever you go? Download the News 5 app for free now: Apple|Android

Download the StormShield app to receive weather alerts on your iOS and Android device: Apple|Android

Read and view the latest Power of 5 forecast here.